In most cases, the answer is no. Warehousing goals need to closely align with corporate objectives if the business is to succeed on revenues, margins, and profit performance. By Larry Lapide | Supply Chain 247

My last article, “A Tribute to the Ever-Evolving Warehouse”, chronicled the evolution of warehouses as they moved from traditional stocking warehouses, to distribution centers (DCs), and then to full-service fulfillment centers.

The growth in outsourcing and off-shoring of the Source and Make functions have rendered warehouses the last (and often the only) corporate facilities to handle customer shipments.

Throughout history, warehouse workers have been manual laborers that did a lot of lifting, moving, and loading. The goal of warehouse operations was to be cheap, mechanistically productive, fast, and accurate in order fulfillment.

Automation has largely been deployed to achieve these types of operational objectives. Now that warehouses have become one of supply chain’s most important functions, however, managers should revisit how warehouse performance is gauged. Are the operational objectives strategically aligned with the company’s competitive strategy? My experience tells me it’s unlikely.

I’ve encountered situations in which warehouse operations were wildly successfully in meeting their performance objectives. The problem was that these objectives conflicted with corporate strategic goals. Three anecdotal examples are discussed below.

First, during a conference I attended, I sat in on a presentation given by two warehouse managers from a pet foods company. The speakers boasted that throughout their company’s long history, 100 percent of orders were shipped on-time. Amazingly, this was their operational performance goal.

They told a story about an instance where an order could not be shipped on time because an item on the order was out of stock. Rather than ship the order late, one of them went into a local pet store and bought the product there. They then repackaged and shipped it to the customer, meeting their 100 percent on-time goal.

Yet this solution surely ran counter to the corporate profitability goals as the company obviously lost money on the product that they purchased at retail and then re-sold at wholesale prices. Another concern was that the stock-out was not documented. I’m sure the company’s inventory managers would have liked to have been informed in order to prevent future stock-outs.

In this example, the sole objective was on-time shipments, with no regard to profitability. This is typical of “Perfect-Order” goals that view performance in the eyes of the customer, absent any company-view perspective.  What was needed instead here was an “Efficient Perfect Order” goal. This more comprehensive objective supplements the Perfect Order goal with criteria on how an order was filled in comparison to how it was planned to be filled.

Implementing an Efficient Perfect Order goal would have accomplished two important things: (1) the incident would have been documented and (2) no credit would have been given to filling the order because it was not filled properly (and thus cost the company money).

A second situation involved a grocery store chain that did business in Puerto Rico. Each week, the stores ordered goods from a warehouse in Florida, which loaded the goods in a container for shipment. Often, after the goods were loaded, there would be a lot of extra space left in the container.

So to save transportation costs, workers filled in the extra space with paper products. When a store manager got the extra paper products and realized that there was a surplus, he would conduct a sale to get rid of them. Over time, managers were running weekly sales—that is, until it was discovered what the warehouse workers were doing.

In effect, to meet transportation cost objectives the warehouse workers were invariably forcing store managers to heavily discount paper products. This, of course, had significant impact on the grocery store’s profitability, to say nothing of the disruption it caused to the merchandise managers’ promotional plans. The root of the problem: warehouse goals conflicted with corporate objectives.

A third and last anecdote involved a supply chain colleague who worked at a manufacturer of medical supplies and devices. The company had consolidated logistical operations so that all inventories were held within the same warehouse. Warehouse performance was evaluated largely on productivity metrics, irrespective of the products handled.

Because the supplies products were high-volume (yet low-margin), the warehouse director focused the lion’s share of employee efforts on them. Consequently, he had less time to spend on the smaller-volume, faster-growing, and highest-margin medical devices.

Because my colleague worked in the medical devices division and his goals were revenue and margin-focused, he constantly bickered with the warehouse manager to get medical-device orders shipped on-time and shipped before the supplies orders.

The finance organization agreed with him because from a corporate cash-flow perspective it had similar goals. By aligning goals, this ongoing bickering between managers could have been avoided. Specifically, goals around revenue, cash-flow, and profit-oriented performance should have been incorporated into the warehouse director’s objectives.

These anecdotal examples underscore that the warehouses of today need to have some performance objectives that align to corporate-wide objectives. In an earlier white paper for AMR Research (now Gartner) titled “What About Measuring Supply Chain Performance?”, I discussed an approach for establishing a set of balanced supply chain performance objectives that align to corporate go-to-market strategies. (I consider this alignment to be the mark of an excellent supply chain). 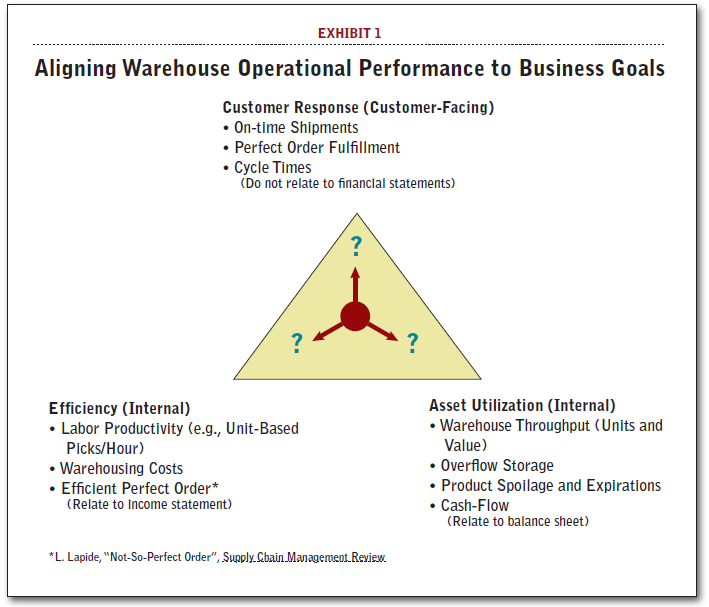 The approach uses a triangle as depicted in Exhibit 1. The location of the “dot” within the triangle represents the balanced focus among three types of operational performance objectives: efficiency, asset utilization, and customer response.

At each point in the triangle are examples of operational performance objectives that might be relevant to warehousing operations. However, note that a few of these are not typical.

For example, warehouse operations are usually goaled by metrics based on unit volumes, such as number of picks, shipments, and receipts—without regard to the value of goods handled. Adding in metrics based on values such as the revenue, margin, and profitability derived from goods will incent a warehouse to be more revenue and profitability oriented.

Supplementing the typical goals that are focused only on being cheap, productive, fast, and accurate, with the values-oriented objectives would better align warehouse goals with other corporate objectives.

In summary, now that the warehouse is becoming more important to competing in the marketplace, it may be time for managers to reset warehouse goals so that the whole supply chain team works in unison to achieve corporate-wide objectives.