Flying parcel-carriers are the next logical frontier for delivery companies  drones that could someday deliver customers packages. December 06, 2013 By Supplychain247.com

Amazon made headlines Sunday night when it announced it was working on small drones that could someday deliver customers packages in half an hour or less.

But the e-commerce giant isn’t the only company researching how to harness the potential of small unmanned aircraft: The Verge has learned that the world’s largest parcel service, UPS, has been experimenting with its own version of flying parcel carriers.

Sources familiar with the company’s plans say it has been testing and evaluating different approaches to drone delivery. Asked for a comment, a company spokesman said that, “The commercial use of drones is an interesting technology and we’ll continue to evaluate it. UPS invests more in technology than any other company in the delivery business, and we’re always planning for the future.”

In some ways, say industry experts, this is no surprise. “I would be shocked if a company like UPS wasn’t considering this,” says Ryan Calo, a law professor specializing in drones and robotics. “If you want to compete in logistics and delivery, drones and unmanned robots have to be part of the conversation about where things are headed.”

So far UPS has kept quiet about its plans, perhaps because any drone delivery project is years away from being legal and operational. For Jeff Bezos, on the other hand — who admitted that his drone fleet probably won’t be available for some time— the news was perfectly timed to hit on Cyber Monday, driving tons of free publicity to Amazon on the biggest online shopping day of the year. 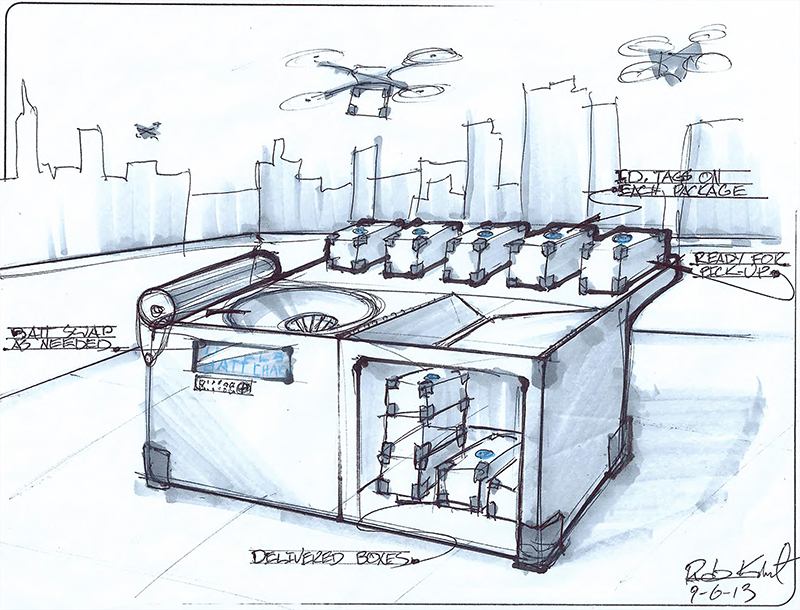 UPS has a number of different ways it might utilize drones. It could offer something similar to Amazon’s Prime Air, or it might use them to help move packages around its own warehouses. Calo was skeptical of the video offered up by Amazon, where a drone drops off a package in a family’s suburban driveway. “I think from both a tech and a policy perspective, delivering to consumers in residential areas is going to be tough thing to accomplish any time soon,” says Calo. “But a company like UPS could use drones to bring packages quickly and cheaply from a major airport or city to pick-up centers in more remote locations, speeding up delivery for a lot of customers.”

Others in the industry are more bullish on how quickly a drone delivery service could be up and running. According to Colin Guinn, the North American CEO for the drone manufacturer DJI, “A company like Amazon or UPS could have a safe, operational fleet in 18-24 months,” he tells The Verge. “What we need in terms of tech is improved object detection and avoidance, because GPS coordinates alone won’t cut it if you got a car or some kids in the driveway.”

FedEx founder Fred Smith has spoken repeatedly about his desire to move to a fleet of unmanned aircraft, something he believes could generate major cost savings. The impediment so far has been regulators. “We have all this stuff working in the lab right now, we don’t need to reinvent the wheel,” remarks Guinn.

“We need a set of rules from the FAA. It’s just a matter of getting the laws in place so companies can begin building to those specifications and doing some real field testing.”