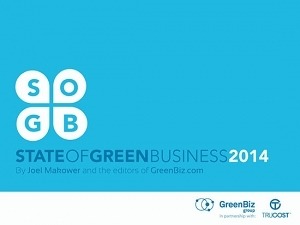 State of Green Business, our seventh annual assessment of corporate sustainability trends and metrics, is just out. It paints a picture that is both optimistic and highly problematic a perfect metaphor for the sector.

First, the good news. The state of the art of corporate sustainability continues to evolve. What’s business as usual today was not that long ago innovative, even breakthrough: biobased products, accounting systems that place a realistic value on water and carbon, smart supply chains that optimize transportation and energy, renewable energy that isn’t just for show, and more.

In the free report (download here), we identify 10 key trends that point the way toward future advancements and progress in the year ahead. (An interactive iPad edition, also free, will be launched next week.)

Now, the bad news. For all of the advancements and achievements — some of which are chronicled in the more than 1,200 articles we run each year on GreenBiz.com — we’re not making much progress. When you actually measure year-on-year progress companies are making, it’s a disappointing state of affairs.

That’s what we do each year in the report, along with our partners at Trucost plc, which helps companies, investors, governments and others “understand the economic consequences of natural capital dependency.” Trucost researches and standardizes the environmental performance disclosures of more than 4,600 companies worldwide, representing 93 percent of global markets by market capitalization.

To create the metrics for State of Green Business, Trucost looked at two subsets: the 500 U.S. companies that make up the Standard & Poor’s Index, and the MSCI World Index, covering more than 1,600 companies in 24 developed markets. For most metrics we present, we compare the 500 U.S. companies alongside the larger, 1,600-plus global universe over a five-year period.

In most cases, the progress is incremental. In some cases, it’s flat, or even declining.

Take carbon, for example. Total greenhouse gas (GHG) emissions among both U.S. and global market indices remain flat. For the five-year period between 2008 and 2012, U.S. emissions were essentially unchanged while global emissions ticked up slightly. All told, it’s a wash. 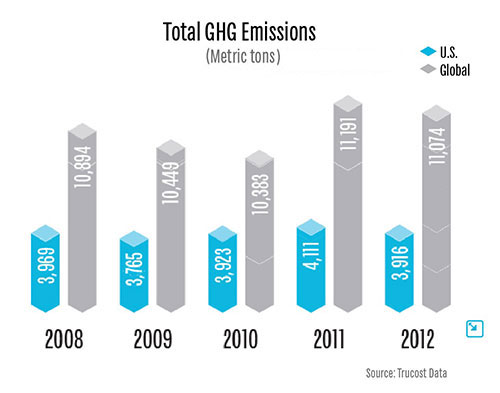 The data is vexing whether one views it in terms of absolute emissions or intensity, which are emissions normalized to economic activity. Intensity, too, is largely unchanged — from 450 tons per $1 milllion of revenue for both U.S. and global companies in 2008, to 440 tons for U.S. companies and 460 tons for global companies in 2012. Again, it’s largely a wash, meaning that for all of the efforts companies are making, it’s not leading to progress.

And the prognosis isn’t much better. According to the U.S. Energy Information Administration, energy-related carbon dioxide emissions in 2013 are expected to be roughly 2 percent above the 2012 level. Despite the best efforts of hundreds of U.S. companies — some of which are committing to be “carbon neutral” — greenhouse gas emissions are going in the wrong direction.

It’s not just carbon. The progress on water use, air emissions and solid waste is minimal, or worse.

And lest you think that companies are talking more than they’re walking, there’s not much growth when it comes to corporate transparency and disclosure. The number of companies issuing sustainability reports continues to grow, as it has over the past half-decade, but the amount of data being reported is leveling off. We may soon reach the point where companies have picked the low-hanging fruit on disclosure and transparency. That is, companies are saying most of what they plan to say about their environmental performance and impacts. Have we hit “peak transparency”?

But there remain reasons for optimism, powered by significant shifts in attitudes and outlooks among companies and their investors and customers, the growth of technology poised to leapfrog progress and accelerate change and a growing recognition among the public that “sustainability” isn’t just about preserving icebergs, rainforests and charismatic megafauna. It is also about public health, community well-being, food security, affordable housing and alleviating poverty.

In a world where technology enables pervasive and persistent connectivity of just about everyone and everything, there are signs that people — from business and political leaders to everyday citizens and consumers — are themselves making connections between the well-being of species and ecosystems and that of their companies, communities and families. And that is being reflected by an upsurge of concern and activity by the private sector.

Are we sinking, swimming or just treading water? I’ll leave the conclusions up to you. I encourage you to download and read the report. The field of corporate sustainability remains vibrant and alive. Now, all that’s needed is progress.