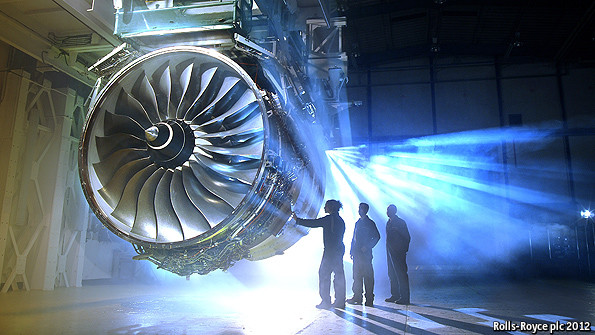 BRITAIN, like many other countries, has gone through a period of huge deindustrialisation. Nearly 9m people were employed in British manufacturing in 1966; by 2011 fewer than 3m were. Manufacturing’s share of the economy is around 10% today, half what it was in 1990. In different countries, from rustbelt America to rustic China, a chorus of voices is urging government to boost domestic industry so that it makes more stuff. The trouble is, according to a study published in Britain on October 30th, most policymakers don’t understand modern manufacturing, let alone how technology is transforming it.

In Britain and elsewhere the days of grimy smokestacks and oily rags have long gone. In the future many manufacturers will not even have a factory, according to the report, which was commissioned by the British government from expert panels made up of 300 business people and academics*. Their verdict: “Manufacturing is no longer just about production. Production is now the core of a much wider set of activities.”

Manufacturing has traditionally been considered to be a process that turns raw materials into physical products. Nowadays, though, the physical part of production is at the centre of a much wider value chain. Manufacturers are increasingly generating revenue from other activities, many of which are categorised as services. As the report points out, 39% of British companies with more than 100 employees derived value from services related to their products in 2011, up from 24% in 2007.

Those services are varied. Rolls-Royce, for instance, now gets about half its revenue from services, including leasing jet engines to airlines on a “power-by-the-hour” basis. ARM, which designs the chips that are used in most smartphones, does not have a factory but licenses its designs to a federation of other firms that makes them. Scores of specialist engineering firms in a successful British cluster in the motorsport industry develop new vehicles for global carmakers, but build few cars of their own.

In the future more manufactured products like these will be packaged with services: components will come with sensors that give automatic alerts when the product needs fixing; “remanufacturing” will become common as firms take more responsibility for how their goods are reused and recycled. JC Bamford, better known as JCB, a world leader in construction equipment, now provides a range of used parts remanufactured to their original standards and upgraded for all its machines.

The report also looked at reshoring, where companies repatriate manufacturing that had been outsourced to foreign firms. With wage costs rising, especially in China, and new technologies changing the economics of production, it can make logistical sense to make things in your home country again. However, the report finds scant evidence of reshoring in Britain. Some manufacturers are doing it. Hornby, a toymaker, has returned 60% of the production of its Humbrol model paint from China; Laxtons, a Yorkshire yarn company, has brought its production back from overseas; and Bathrooms.com now places half the contracts it once awarded to Chinese producers with British ones. But the study reckons there could be much more of this type of reshoring if Britain creates the right business conditions to compete with lower-cost countries. This is especially the case when quality, delivery speed and products specifically tailored to customer demand are important.

But the biggest changes to the factory of the future will come from technology. Computer-aided design and simulation reduces the time and cost of bringing new goods to market. Advanced robotics makes automation cheaper and more flexible. And new materials, such as nanoparticles, will give products novel properties. New production processes, such as 3D printing which makes things by building layer upon layer of plastic and metals, are already used by designers to make prototype parts, but now engineering firms utilise them to make finalised products, too.

Large capital-intensive factories employing lots of people making complex machines, like the car plants run in Britain by Nissan and Jaguar Land Rover, will continue. But the report predicts that a lot of other manufacturing will be small scale and that some of it will even take place within households. The price of the cheapest 3D printer is already below $2,000, and is already being used in home workshops to make art crafts and gadgets.

Manufacturing must also become more sustainable, says Sir Richard Lapthorne, an industrialist who led the report’s expert groups during the two-year project. “In the future companies will not be able to afford to throw things away,” he adds. For example, a factory run by British Sugar in Wissington, Norfolk, not only makes products from sugar beet, but uses the leftovers to produce bioethanol, animal feed and topsoil (washed from the beet). The factory’s heat from waste warms a greenhouse that grows 140m tomatoes a year. Even the factory’s carbon-dioxide emissions are recycled through the greenhouse to help plants with photosynthesis.

Many of the latest technologies will require fewer workers. This means manufacturing will not produce many new jobs, at least not directly on the factory floor. However, taking a broader view of manufacturing and its related services, the factories of the future can boost overall employment. Understanding this more complex value chain will be critical to any government wanting to assist industry rather than hinder it. (To help with that the report suggests the British government set up an office for manufacturing.)

One of the biggest concerns confronts manufacturers everywhere: education and training. Manufacturing will become more highly skilled. In the years to 2020 there will be around 800,000 jobs to fill in Britain as people retire or leave manufacturing, taking their experience with them. Helping people gain the necessary apprenticeships, technical qualifications and degrees is a legitimate role for government. But firms will need to do their bit as well. At present only a quarter of engineering and technology graduates in Britain end up working in manufacturing six months after graduation. Many go to financial firms. The laws of supply and demand mean manufacturers are going to have pay more if they want to attract the talent needed for the next industrial revolution.

*Foresight (2013) The Future of Manufacturing, published by the Government Office for Science, London