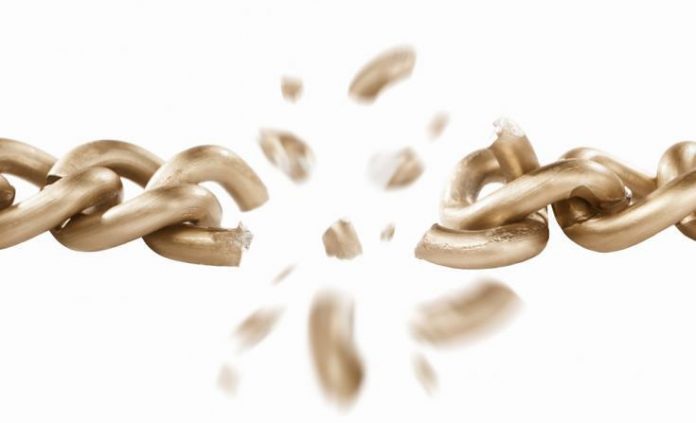 It’s one thing for a company to make an internal decision about sustainability, like cutting energy use at corporate headquarters. But it’s another matter entirely to dig deeper into systemic problems rooted in the supply chains of multinational businesses with elaborate networks of global vendors.

Even unknowingly propping up the trade in conflict minerals, contracting with factories committing labor violations or doing business with suppliers who irresponsibly source raw materials can have disastrous implications for reputation and financial liability.

Now more than ever, supply chain transparency and traceability are gaining currency, thanks to increasing awareness among consumers, investors and corporate c-suites.

Aside from high-profile news stories about horrific factory conditions, other social and political drivers — geopolitical instability in key markets,  supply of valuable commodities and the potential for long-term losses on fossil fuel “stranded assets,” to name a few — reflect the ways environmental sustainability is melding with anxiety about climate change and economic inequality.

And it’s a trend that doesn’t look to be going anywhere anytime soon, meaning that companies and the organizations that work with them must go beyond the mostly incremental reforms made to date.

The next 10 years are going to see a level of change that is outside of our experience,” said Volans Founder John Elkington at a GreenBiz VERGE Salon event on supply chain sustainability held Tuesday in London. He added that, “part of our challenge, collectively, is to recognize those things early enough.

Nascent technologies, new types of supply chain reporting (no, not another survey) and better quantifying the costs of inaction represent perhaps the most compelling paths forward, concluded a panel of some three dozen supply chain executives gathered for the event in London. The group spanned corporations in diverse industries, such as Cargill and Hewlett-Packard, along with professional services firms like PwC and nonprofits including the Marine Stewardship Council.

1. Where should you start?

It may seem like a given that a company’s leadership could recite from memory where their materials come from and who handles them on the way to market. Not so.

Cueing up a slide entitled “are you in the dark?,” Evans said that even hammering out a definitive list of all global suppliers or charting long-term risk can be a challenge. That’s especially true when factoring in extraneous pressures outlined by Elkington: 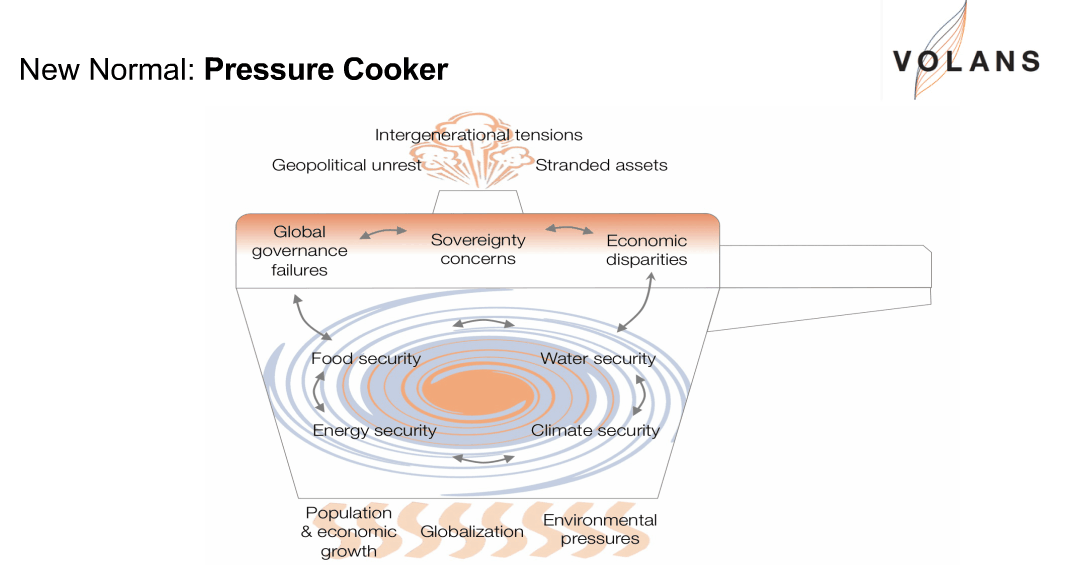 Pierre Courtemanche, CEO of tracking technology provider GeoTraceability, said that conflict minerals provide a “shocking” example of how bad supply chain abuses can be. But on a more practical level, disaggregated vendors of widely varied sizes add to the challenge. In Africa, for instance, he said that the average production for a farmer is 60-80 kilos of food.

Voluntary industry certifications are one way to get informed, but the price of getting them can be prohibitive for smaller companies in particular. “The cost of certification is really high,” Evans said.

When it comes to understanding where individual businesses can have the biggest impact, that largely depends on direct relationships with suppliers.

Supply chain power dynamics aren’t as simple as big companies calling all the shots, even in cases of huge global volume or name recognition.

McDonald’s, for instance, serves about 69 million customers per day in 100 countries. But in the vast majority of those countries, the company’s buying power amounts to only 1-2 percent of the total beef market.

That leads to lots of shared farms, factories and other facilities where customers might not always see eye to eye on how sustainable operations should be — a tricky balancing act given the multitude of things that can go wrong: 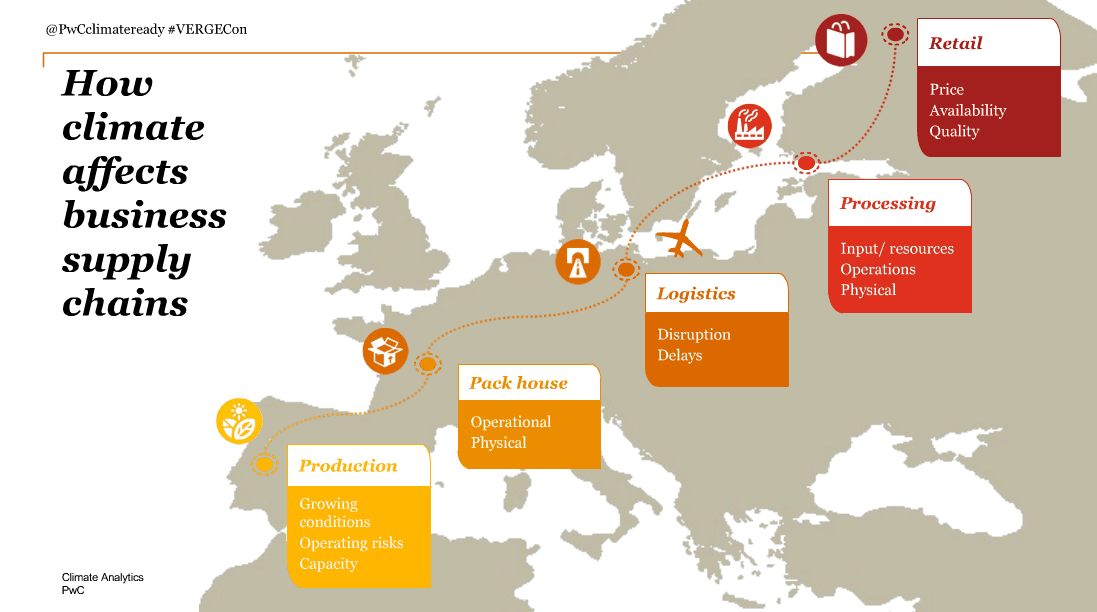 Cargill is one massive supplier seeking ways to marry sustainability and financial opportunity for its buyers.

Dave Bennett, a strategic business development director for the company, cited one example of a customer who faced a new mandate from their own client in the beverage industry on sustainable malt sourcing. Facing a loss of $5 million in business, the company decided along with Cargill that it was worth it to invest in new capital expenditures to source more sustainably.

For other supply chain executives finding themselves in contention with their business partners, there’s also the concept of strength in numbers.

Collaborations with NGOs, issue-specific nonprofits or other companies a la the Sustainable Apparel Coalition — have already singled out key issues like water usage. But it can be difficult to drill down into day-to-day problems with potential to boil over if other customers of a common supplier choose to bury their heads in the sand.

Buying realtime labor data, for instance, might not be a priority for all 10 companies that share an overseas factory, even if one or two of those businesses are pushing for stricter rules on forced labor, worker age limits or other issues.

3. Where should you dig for data?

Given the volume of raw materials and other moving parts in the supply chains of large companies, it’s little suprise that some sustainability advocates are enthusiastic about the potential to apply Big Data analytics to operations.

The familiar catch: figuring out what data to focus on and how to collect it.

To gauge long-term trends that stand to impact pricing and availability of commodities, PwC (which sponsored the event in London) has been at work on a climate analytics project to “fill the gap between science and business,” said Assistant Director of Urbanization, Climate and Development Dan Dowling.

The project involves long-term modeling of how potential scenarios for climate change — the differences between financial fallout from a 2 degrees Celsius change in global average temperature vs. a 4-degree change, for instance — might play out for specific commodities.

But what about the current realities of how stops along the supply chain function?

“After that inspector leaves, what are the conditions? That’s a question many companies are starting to ask,” said Kohl Gill, CEO of crowdsourced labor information startup LaborVoices.

He quotes an estimate that businesses are now spending $15 billion per year on the issue — a significant investment, but still a relative drop in the bucket.

Asking the right question is certainly part of the question, but whom you ask might be more important.

“Workers by and large have access to mobile phones,” Gill added. “Why are we relying on inspectors?”

His company collects anonymized realtime data on labor conditions from workers themselves, then sells that information — including potential “red flags” given the likelihood of serious issues — to companies willing to pay for a subscription. Gill said that the company’s mission also entails broader transparency, and that he hopes to release public information on the findings of LaborVoices by next summer.

The Marine Stewardship Council, for instance, is currently running an online transaction verification pilot that entails collecting information like date of sale, reported volumes and species of certified seafood. The organization also verifies documents to trace products back to the fishery and collects DNA samples to confirm accurate labeling. Once that data has been collected, the next step is ensuring that the right people get their hands on it — a process inspiring a slew of other technology offerings, but which also comes with new complications like cybersecurity.

“There are already people hacking into autonomous cars. People like Google don’t want to talk about it, but it happens,” Elkington said of the additional need for enhanced security in supply chain data.

4. How can technology support higher standards?

Aside from new types of crowdsourced data and other tech-enabled efforts to drill down into painpoints in the supply chain, a range of other hardware and software offerings are coming to market.

“Within the decade, we’ll have walk-through experiences where people can actually see supply chain conditions,” Elkington said, hypothesizing that a more advanced version of a gadget like Google Glass might let prospective customers (or regulators), “see way down the supply chain, if they choose to.”

In terms of how companies might organize themselves to get ahead of increased outside scrutiny, Elkington pointed to software companies like SAP and Thinkstep (formerly PE International) jumping into enterprise dashboard offerings.

“They’re going to want to see the information displayed in front of them in a way that makes sense,” he explained.

Multiple enterprise and upstart companies are wading into that field, including GeoTraceability, which was acquired by PwC last year. Here’s a snapshot of their offering: 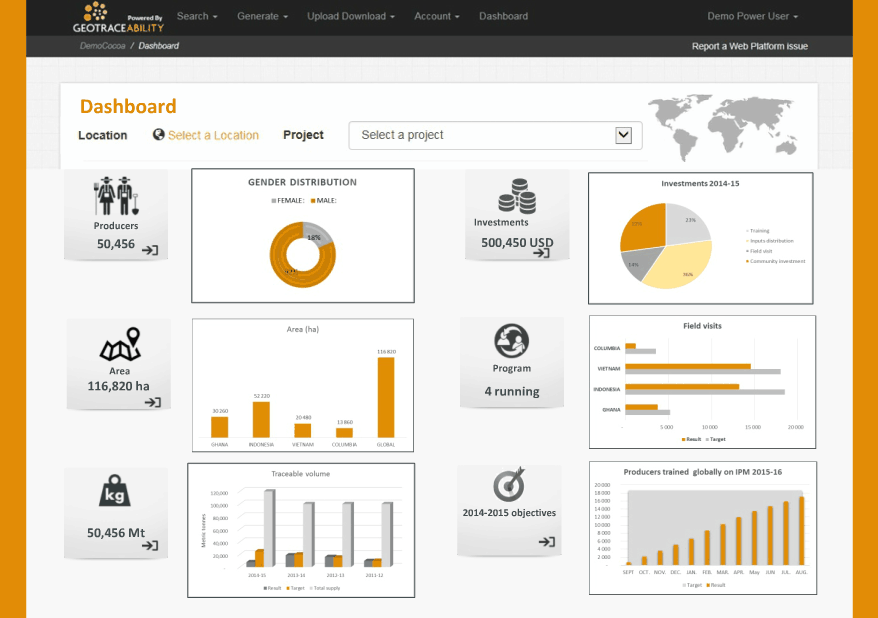 Hewlett-Packard’s Limited Sustainability Manager Bruno Zago said that his company has chosen to focus on conflict minerals, since materials mined in locations including the Democratic Republic of the Congo are prevalent in consumer electronics. Implementing sensors that can provide geolocation information and other data about a commodity’s trajectory can help elucidate otherwise murky sourcing.

“We can look at the traceability of those minerals all the way back to the original mines it came from,” he said. “Some of it is as easy as just tagging the mineral when it comes out of the mine.”

With conflict minerals in particular, that process required the extra step of weeding through reputable suppliers in between companies and mining materials by investing in a “conflict-free smelter” program.

5. What’s the impact on the bottom line?

As is the case with close-to-home investments in sustainability initiatives like renewable energy or water savings, some strategies with direct environmental or social benefits also lend themselves fairly naturally to financial arguments for long-term cost stability or lower power bills.

Slightly less obvious is the business case for investment in things like climate change mitigation for commodity crops, which companies including PwC are now striving to outline:

But what about dire supply chain pitfalls with much less linear models for payback, or even the prospect of significant cost increases?

Labor issues in particular present a scenario where outsourced manufacturing operations for everything from packaged foods to a pair of jeans or a new smartphone are intended to lower costs of the finished product. Giving workers a raise to increase their standards of living or paying older, more skilled workers instead of cheaper young workers would cut into slim profit margins on products that consumers now expect to be cheap.

With the chicken-and-egg issue of relatively cheap goods that are also cheaply made, the potential for a payoff from better sustainability is often less explicit. Still, other motivating factors exist.

There is always the potential to invigorate sales efforts with local economic development PR campaigns — a branding strategy that companies like Everlane have mastered by making their marketing more personal.Pressure from customers, regulatory vulnerability or legal liability are also all in play.

“Businesses are being asked what are they doing about this,” said Dan Dowling of PwC.