The annual state of logistics report is just out with much fanfare from Rosalyn Wilson and CSCMP, with the headline news that overall US logistics cost were modestly up in 2011, rising just 2.6% to 8.5% of GDP. That after a 10.6% rise in 2010, which in turn followed two years of logistics cost decline driven by the recession.

A graph of the last 10 years of logistics costs as a percent of GDP is provided a bit further down the page.

This represents the 23rd edition of the report, which was launched in the late 1980s by the late Bob Delaney and sponsored by his company, Cass Information Systems. Somewhere along the way, CSCMP took over the sponsorship, and in the late 1990s Wilson, who has a long career in the logistics industry, began to support Delaney in his efforts. Upon Delaney’s passing a few years later, Wilson took on the challenge alone, largely keeping the existing methodology.

Over the past couple of years, the report has received even more hype, with a corporate sponsor (Penske, for the third year) and a panel discussion of supply chain executives and more at the Washington DC report launch event on Wednesday. I was not able to make that press conference, but as always will summarize the report here. Videos of the event/panel will be available soon from Penske.

Just for perspective, the total cost of US logistics was estimated at $1.28 trillion in 2011, up 6.6%. A lot of elements go into that number, from warehouses to trucking to pipelines, but the three main categories are inventory carrying costs, including the costs of warehousing, (32.6% of the total), transportation costs (62.8%), and administrative costs, mostly related to logistics IT spend not otherwise capture in the other two categories (just 4.6% of the total).

Within transportation, trucking related costs compromise 78% of transport costs and 49% of total logistics spend, while other carriers (rail, water, pipelines, etc.) account for 22% of transportation spend and 13.8% of the total spend.

Carrying costs were up 7.6% in 2011, but that was almost all from a general rise in total inventories (not necessarily a rise in inventory versus sales levels). The higher the absolute level of inventory, the higher the absolute spend for insurance, taxes, depreciation, etc. We will note here that what the true carrying cost of inventory should be is far from an exact science, and others might calculate this macro-number differently than Wilson does, but the report has been using the same methodology for years, so year over year the numbers and direction are consistent and do reflect trends. 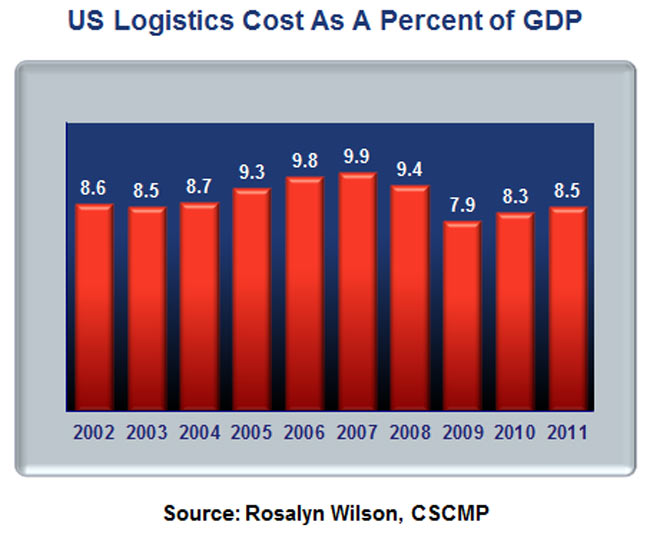 For example, the report uses the commercial paper (short term) interest rate for calculating the interest cost expense of those inventories, while others might use the cost of capital or something else. Those commercial paper rates were again incredibly low in 2011, falling to just .9% from 1.3% in 2010. So just to be clear how this works, if and when commercial papers rates move back up to historical type levels, US inventory carrying costs as measured here will rise significantly.

Transportation costs were up 6.2%, which Wilson says was almost all from higher rates and fuel costs, not higher volumes. The ATA Freight Tonnage Index, one measure of freight volumes, despite some ups and downs for the year saw its average across 2011 about where it began, meaning volumes were flat.

She notes rail spend was up 15.3% year over year in a period where volumes were up just slightly, showing the rail carriers’ pricing power, as we have regularly noted on these pages, with core pricing up 4-5% for a long stretch of quarters.

So, with total logistics spend up 6.6%, and GDP growth of just 1.7%, you wind up with the 2.6% increase in logistics costs versus GDP.

I think Wilson is correct when she says that “Capacity in the trucking industry is in a tenuous equilibrium state – true shortages are rare, but available capacity is not abundant.” She, like many others, is concerned over existing drivers shortages that could expand into a real crisis.

A positive sign for the US economy was that exports soared in 2011, up 14.5% for the year, and 15.1% for manufactured goods, while imports rose by a lower amount, at 13.8%. In 2011, the US also became a net exporter of oil and oil related products (notably refined gasoline) for the first time since 1949. We will note, however, that this export/import trend had started to reverse itself in the latter part of the year, and so far in 2012 the trade deficit with China and the world has been sharply on the rise (a reflection in part of the strong US dollar, versus its weakening in the first half of 2011).

A few other highlights from the report:

The evidence seems to suggest that retailers are holding a tight line on inventories, pushing inventory holdings back up the chain. The inventory to sales ratio for retailers was basically flat in 2011, but grew substantially in the wholesale and manufacturing sectors during the year.

Warehousing costs were said to be up 7.6% in 2011, which Wilson primarily attributes to rising costs for rents/leases, which had been crushed since the financial crisis started. She also notes for the first time since 2008, developers were starting to build new distribution center sites in 2011.

Rising new Class 8 truck prices are impacting how carriers think about their fleets, and contributing to asset discipline. New trucks today are 30% or more above the costs of just a few years ago, meaning more existing vehicles need to be sold relative to new buys. Even though new truck sales have been relatively strong, even more are being sold off, mostly to foreign markets, keeping the nation’s overall fleet status flat or lower.

Only 665 carriers went bankrupt in 2011, a change from the past few years when about that many went bust each quarter. Wilson says the reduction in bankruptcies is not only a reflection of the better rate environment, but that used truck prices for foreign buyers are way up, allowing many carriers to sell of assets profitably and just leave the market, versus filing bankrupcy.

If the new Hours of Service rules due go into effect in July, 2013 as scheduled, Wilson says estimates are that there will be a 3-8% drop in driver productivity. We say that will come back in the form of higher rates. If, as the American Transportation Research institute calculated in 2011, driver wages and benefits equal about 37% of marginal trucking cost, that would imply potential freight increases of 1.1 to 3.0% (.37 times 3-8), apart from any other upward cost or rate pressures.

Wilson cites a Union Pacific executive as saying that if US truckload capacity is reduced by just 5% from regulations and a driver shortage, intermodal loadings are likely to jump nearly 30%. Truckers have been acquiring intermodal chassis and trailers like crazy, Wilson says.

Volume levels were not good at most US ports. The port of LA was down 1% in container volumes, Long Beach 3%, and Seattle 5% in 2011. Oakland and Tacoma were up 1% and 2% respectively. On the East Coast the news was a bit better, with New York/New Jersey and Savannah both saw increases of 4%, while Charleston and Norfolk were up about 1%. Given the growth imports in dollars, this implies we are importing higher priced/value goods, does it not? Or more from Mexico/Canada on trucks.