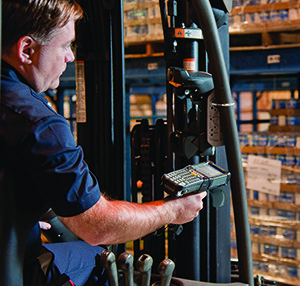 The RFID market is showing signs of steady growth as companies work to achieve a meaningful return on investment in specific areas of given processes. Handheld RFID readers can scan large quantities of items simultaneously in a wide or narrow target field.
–

It could be argued that the industry got a little ahead of itself in the early 2000s when radio frequency identification (RFID) was expected to transform supply chains overnight.

The concept of the “Internet of Things” was still years away, but the appeal of digitizing physical assets and achieving absolute visibility led to some grand theories. However, although much of the early hype has faded, RFID continues on a trajectory toward widespread adoption and impact.

“People had unfair expectations that it could change the world in a couple of years,” says Michael Fein, senior product manager for RFID at Zebra Technologies. “But if you look at the technology adoption curve, RFID is not at all behind. I’d say the technology is doing fantastically well.”

Other RFID system suppliers characterize the market as “going gangbusters,” “on a very healthy evolutionary track,” and “growing at a rate significantly higher than traditional bar code growth rates.” These sentiments are backed up by RFID market research from IDTechEx, which expects the market to grow from $7.88 billion in 2013 to $9.2 billion in 2014—before more than tripling in the next decade.

The secret to this growth is not the wholesale replacement of bar codes with RFID tags, nor is it the deep pockets of sophisticated retail, healthcare, or governmental entities. It’s the mindset that a mere handful of tags and a single reader can provide a meaningful return on investment (ROI) for a very small slice of a given process.

“My advice is to be very focused,” says Alan Melling, senior director of strategy and software at Motorola Solutions. “If you try to solve every problem in the world with RFID, your project will fail. But if you want to know about stock-outs in the underwear department, RFID could be a great solution.”

Many warehouses and DCs are already handling RFID-tagged items, but don’t know or care. That’s because many manufacturers are tagging their products at the end of the manufacturing line before packing them for shipment to the retail store.

There, RFID is used to manage inventory levels in the store. Yet as one brand of underwear, one hand truck fleet, and one receiving door after another become RFID-enabled, Melling says, the gaps in visibility and value will slowly begin to close.

“What will drive adoption in the long run is the Trojan horse idea,” Melling says. “When tags are in place because one part of the supply chain sees the value, the technology becomes more appealing for others to collect data because the required investment is much less. There’s an opportunity to leverage an investment that someone else has already paid for.”
Remember: It took more than 20 years for bar codes to reach ubiquity.

In all likelihood, bar codes will remain the standard for capturing data at specific points in a process for years to come. It’s the places between those points where RFID might prove valuable.

Unlike a bar code, an RFID tag constitutes a unique identifier for the tagged item—it’s not a pair of pants, it’s this pair of pants. Uniqueness is often important in e-commerce applications where value-added steps result in a change to a product, which is another piece of information RFID is uniquely able to capture.

“Any system will tell you something moved from Point A to Point B, but RFID will tell you what happened in between by recording steps in a process as well as any state change,” says Su Doyle, head of industry programs for OATSystems, a division of Checkpoint. “Now you know both where an item is and what it’s doing. From there, you can start to think about what it could be doing.”

For this data to be useful, it must feed a warehouse management system (WMS), an enterprise resource planning system (ERP), or some other system of record capable of identifying unique items. “Many WMS systems do not operate at an item level,” says Fein. “This can create complications with many legacy systems.” Then again, it might not be important to know that a certain pair of jeans was manufactured on a specific date.

Another benefit of RFID is the simple ability to count things rapidly and accurately—especially without line-of-sight or easy access. This can be an advantage in cycle counting in the warehouse or taking inventory at the shelf level in the store. Melling reiterates that the applications that succeed are very mundane.

“Everyone has systems to track things, but they often don’t work the way they might like,” Melling says. “The system says I have five shirts in a location, but the picker sees three. There’s a gap between reality and the system. RFID can tell you what the world really is, regardless of what the inventory system says.”

Other adopters are using RFID to track dwell time or to ensure that product is moving from one process or step to the next. One project monitored the use of specialized lift trucks used to putaway bulk items in a warehouse. The first discovery was that the lift trucks tended to sit idle about 50 percent of the time. Another company used RFID for shipment validation of high-value product headed to high-value customers.

“In some circumstances, items got to the shipping dock and sat there for days,” Melling says. “There’s no way that’s supposed to happen in the ideal process you’ve designed.”

Still other manufacturers are using RFID to manage exception handling processes by identifying shipments that were set aside because they have a problem that needs to be addressed later. RFID allows them to quickly sort through the shipments to identify the next one to be worked on.

“I have seen capital goods manufacturers set shipments aside because they know there’s a problem, and they need to sort through it, but later never comes,” Doyle says. “Some manufacturers have boxes of incorrect shipments stacked to the ceiling, waiting to be addressed. Everyone has exception handling processes, but when everything is an exception, that’s a problem.”

Within a pallet of mixed goods, for instance, RFID can quickly locate the mis-pick or stock-out. Tom O’Boyle, director of RFID for Barcoding, offers the example of one customer whose receiving process was significantly improved by RFID.

“Now they scan for the three things that aren’t here as opposed to counting everything that is here,” O’Boyle says. “They now have more accurate data in a fraction of the time.” For added convenience, a sort of ‘Geiger counter’ function can even point a worker to, say, the top left area of a container for the target item.

Whether between two points in a facility or between Shanghai and Los Angeles, RFID can prevent products and assets from getting lost along the way.

In the process, it can create visibility from dock door to doorstep, according to Kurt Mensch, RFID principal product manager for Intermec by Honeywell. “Many are familiar with the concept of the last mile and how best to deliver products and collect data along that mile,” says Mensch. “RFID can serve as a ‘last few inches’ technology.”

Using RFID to ensure that the shelves inside a retail store always have all possible sizes can create a significant impact in warehouse and DC operations, adds Zerbra’s Fein, even if RFID is not used in the facility. Lots of execution functions react to that store-level RFID data, including seasonal preparedness, reverse logistics, merchandising or the establishment of regionalized inventory.

“If retailers are changing order patterns with RFID, which they should if they’re using it properly, it affects manufacturing cycles and how warehouses are organized,” Melling adds. “It informs what everyone wants and benefits everyone indirectly, although in the future it will start to benefit them more directly.”

What all of these examples illustrate is that while the Internet of Things may not be as much a part of the discussion today as it was in the past, RFID is gaining traction in the supply chain. It’s just not being used to track pallets and cartons as initially envisioned. The biggest challenge to the adoption of RFID moving forward could be the reluctance of many users to talk about the value they are realizing from the technology.

“In the past four years, RFID use cases have centered on customer-facing processes in both retail and industrial markets,” says OATSystems’s Doyle. “But I think it’s interesting that aerospace and defense firms are talking about their successes with RFID while many retailers are much more secretive about the competitive advantages they have gained.”