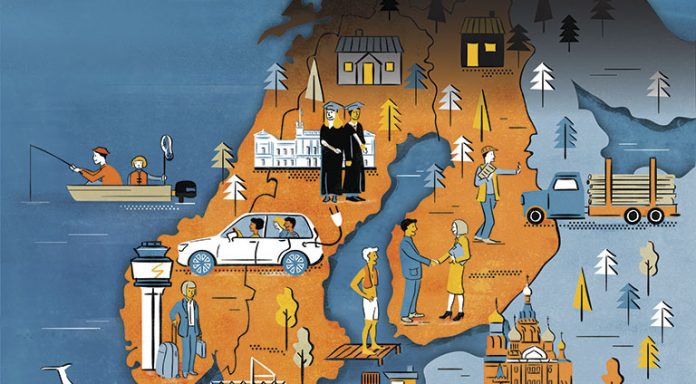 The Nordic countries differ geographically, financially and even culturally, but says Nick Martindale, ensuring corporate social responsibility is followed especially when dealing with distant suppliers is something they have in common.

The principles of procurement may be broadly similar in most parts of the world, but there will inevitably be different focuses, priorities and pressures depending on the cultural, geographic and economic forces at play in particular regions.

The Nordics is one area where there are a number of such quirks, despite its physical closeness to the major mainland European economies.

Culturally, this is a part of the world where corporate social responsibility (CSR) – including both environmental and ethical aspects – is particularly important to governments, the general population and organisations. Consequently it is a strong area of interest for those working in procurement functions.

And it can be a particular focus for those organisations that engage with suppliers based outside the region, especially in emerging markets. Global shipping firm Maersk Group has made this a key element of its procurement operations, and undertook a study in 2014 to assess the social and environmental practices of suppliers in particularly risky categories.

In total, 1,185 suppliers were assessed and 51 per cent were found to be either in compliance with our third-party code of conduct or partially in compliance with minor improvements needed,” says Renata Frolova, head of responsible procurement, who is based in Denmark. “With more than 650 suppliers in need of or having an action plan, we acknowledge that a sizeable amount of effort is still required to ensure all suppliers with major and critical issues act on plans to reach compliance.

The areas in need of improvement are labour and human rights, she adds, with health and safety, working hours and compensation, and environmental performance particular concerns.

This is also a strong focus for Per Hill, chief procurement officer at medical care business Getinge Group, and former CPO at Lantmännen, based in Sweden. In his previous post he oversaw the introduction of a supplier code of conduct, and is now working on a similar initiative in his new role.

“It requires time, because you need to clarify to suppliers that these are the standards you expect them to live up to, and follow up on that as well,” he says. “Auditing suppliers worldwide is quite a cumbersome activity, but we’re looking to buy more from low-cost countries and have to be aware of why they’re low-cost countries, and make sure they are not infringing our supplier code of conduct.”

The exact focus and nature of such activities will depend on the sector in which the organisation works. For Finnish timber and plywood business Metsä Wood, the emphasis is on ensuring its raw material – logs – come from official sources, says Jani Riissanen, chief purchasing officer. Most of its suppliers come from the individual forests which collectively own the co-operative, he says, and are assessed at a group level, but the danger is the small percentage sourced from outside the country. “In Finland the risk is very small because we know which logs can be harvested and which can’t,” he says. “But the main risk is imported logs, such as those from Russia. We have to be very careful because they could be illegal logs.”

Other concerns relate to products such as packaging materials which have to be sourced from outside the region, often from the Far East. “Here the volume and spend are quite small but the risk is quite high, and if there is something like child labour then that could hurt the brand and our group heavily,” he says. “We have a common code of conduct as a group and we expect our suppliers to meet those rules and requirements, and we check firstly that the suppliers accept this and also that they’re really doing it.”

For transport group Arriva, the emphasis has been on developing more environmentally-friendly vehicles for use in city centres in Scandinavia, as well as greener sources of energy.

We have just launched 400 cars into Copenhagen, on a car-share basis,” says David Loseby, group procurement director, who oversees the group’s European procurement operations. “When you talk to the supply base in Scandinavia, there is much greater awareness and adoption of CSR and sustainability.

From a procurement perspective, this kind of initiative can filter through into discussions with manufacturers about vehicle design, and about putting a greater emphasis on lifetime costs rather than purchase price. Manufacturers who have not invested in developing efficient technology would not be considered as potential suppliers at all, he adds.

Lay of the land

The emphasis on CSR is not the only factor with which those working in procurement in the Nordics must get to grips with.

The geography itself can pose some challenges, particularly from a logistics perspective.

“The geographic location in Finland means we’re almost like an island,” says Riissanen. “The sea is all around us and if there isn’t sea there is Russia. So the location is quite far away from other parts of Europe and the Far East and such markets, which means more of our suppliers tend to be located in Finland, because to get from the Baltic to Finland is quite expensive.”

But many businesses that rely on exports find themselves sourcing – or manufacturing – outside the area, says Hill. “Scandinavia has a very small home market, so many of the companies operating in Sweden or Scandinavia depend to a large extent on having production units outside their home market,” he says. “So we have a small head office and three major production sites in Sweden but most of our production sites are outside Scandinavia. That has an effect on purchasing, because you need to have a very international or global outlook; you can’t only work with supplier markets in the region of Scandinavia.”

Procurement is different to other markets. In Finland the profession is not as developed as in countries such as the UK or US, says Antti Suorsa, head of procurement at TeliaSonera Finland, although recent downsizing at Nokia meant many experienced professionals – including himself – joining other organisations, which helped to improve standards across the board. “The challenge in many companies is that the top management doesn’t understand the benefit or value procurement can bring,” he suggests. “That can limit the focus on strategic procurement and the number of experienced resources that you have in the market. That’s very Finland-specific; Sweden is more advanced because there are a lot more global companies.”

It can also prove difficult to attract talent into the region. “Finland and maybe Scandinavia are not very attractive locations for international talent, because it’s quite remote and there are high taxes and dark winters,” adds Suorsa.

“But during the past 10 years Finnish universities have put a lot of focus on procurement and supply chain management so there is now a younger generation that understands and wants to work in procurement.”

Often those who do come from overseas stay for a relatively short time, says Rajat Mitra, former global category director at Danfoss, in Denmark, who has himself now moved to a new role outside the region. “If you come from an Anglo-Saxon background you’re probably a bit pushier and change jobs a bit more frequently, so rationalising the expectations of a global international workforce within the Scandinavia cultures can be difficult,” he says. “People tend to go there for three years and that’s it; it’s probably a stepping stone.”

Nordic culture can also have an impact on procurement, and how the profession operates. Suorsa suggests Finland in particular is traditionally a very trusting culture, where business can be done on the basis of a handshake.

“That can be a challenge when you start to undertake organised procurement because people don’t necessarily understand the value in having good contracts in place, which you can call on when something goes wrong,” he says. But this can also be a positive too, he says, because it tends to lead to stronger relationships with suppliers.

The management style is also different to other cultures, suggests Hill, which can impact on how procurement functions operate.

“There is more transparency and consensus but also greater empowerment of people,” he says. “You can have decisions taken at a lower level in organisations but based on a greater degree of consensus.”

“Many people understand English but other languages are not so common,” he says. “I speak English and limited Russian and German but that is it, so if I want to do business in some other country it can be a limitation.”

The emphasis on work/life balance – the working day tends to end at 4pm and much of the workforce takes lengthy summer holidays – can also create issues when dealing with other cultures.

There is a genuinely strong ethical background and they take that kind of thing seriously,” says Mitra. “I remember one occasion when we had suppliers visiting us and I said “let’s take them out to dinner” and people looked at me a bit blankly. They do really live and breathe those values.”