Concept of Master Production Scheduling, or MPS as popularly known, has been around since 1970s. It was proposed during the formative years of MRP when major shortcomings of Manufacturing Requirement planning (MRP I) surfaced. Make-To-Stock and Mass production inventory models (Push) were the norm those days. Factories would produce finished goods and fill the warehouses regardless of actual customer orders. Master Production Scheduling played a critical role in that environment deciding what factories should produce and when. Much like APICS definition of MPS, most of the literature on MPS will present it as a key stage in planning process and natural source that drives Material Requirements Planning.

A lot has changed since concept of MPS was introduced as part of multi-stage planning process. For instance, the S&OP/IBP has gained enormous attention and popularity in last decade or so. We will find lot more software support for S&OP/IBP with inbuilt integration with Demand planning, Supply planning and Finance planning today than available then. The MRP systems have since evolved into more advanced planning tools thanks to improved computational capabilities.

“Mass Production is speculative. At Toyota, production is based on confirmed orders and is geared to a market that demands fast delivery of a wide variety of products, each produced in small quantities “ – Shigeo Shingo, A Study of Toyota Production System

Move from Push to Pull

Though Mass Production had its advantages (and is still suited for certain products), one of the main limitation is that it is heavily dependent on forecast. In adverse market conditions when demand is unpredictable, manufacturers often end up holding expensive finished goods inventory that they cannot sell. Toyota overcame this problem by introducing Order-based Lean (Pull) production in their plant with the goal of stockless flow production. Similarly many other manufacturers, especially in discrete industry, have deployed demand driven fulfilment and manufacturing methods (e.g., Assemble-to-order/ Configure-to-Order, Make-to-order, Engineer-to-Order) that use the Pull strategy. A wide variety of products like ATM units, automobiles, medical equipment, computers, doors etc. can today be configured to order. It is ironic that even Ford Motors, that had transformed manufacturing industry with success of mass production concepts last century, is offering customer configurable cars online.

‘True customer-focus means that our business decisions originate from our knowledge of what the customer wants, both today and tomorrow. “If you build it, they will buy it”. “That’s business as usual, and that’s wrong. “If they will buy it, we will build it” is right “and we’re going back to it.’ – Bill Ford, Ford Motor Co (2006)

Contrary to traditional Push approach, manufacturers do not build the final product based on a frozen production schedule. Instead, work starts in response to a firm customer order.

So, the question arises, whether the concept of traditional Master Production Schedule is relevant in today’s Order based production environment? MPS may not be dead yet, but is definitely fading into irrelevance. Let us try to understand the role MPS played in traditional multi-stage planning process. 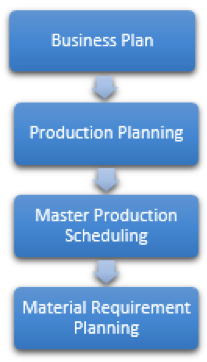 Why is MPS less relevant with Pull?

Essence of Pull concept is to manufacture to a confirmed Sales Order. Therefore, final assembly build is not driven by forecast. Similarly, the need to insulate production from demand fluctuations does not exist anymore. Instead, it is important to quickly communicate these changes through the Supply chain and not to insulate it. Purpose served by MPS in traditional Master planning has become less relevant with Pull approach.

As more and more manufacturers redesign their supply chain and adopt leaner Pull strategies, MPS could gradually be pushed into history.