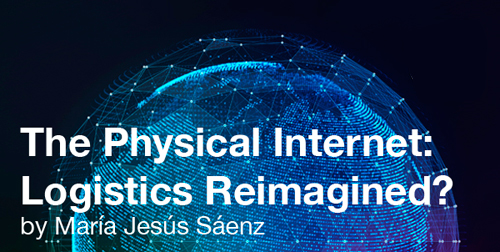 What if the supply chain community could emulate the “Internet world” and create a universal, open logistics network that is economically, environmentally, and socially efficient and sustainable? Such a concept exists, and it’s called the Physical Internet. Today the Physical Internet is a vision for an end-to-end global logistic network, but there are plans to turn it into a reality by 2050.

Companies constantly strive to improve the efficiency of the logistics networks that move their goods worldwide. Although performance levels have increased significantly over recent decades, they are far from satisfactory. For example, too many containers and freight vehicles transport empty space or are idle because of operational delays. All too often, disruptions prevent products from reaching consumer markets, adding to the waste that pervades many logistics networks.

The Physical Internet proposes to eliminate these inefficiencies in much the same way that the Internet transformed the flow of information around the globe.

Before the arrival of the Internet data networks were highly fragmented. Communicating data across companies, especially on an international scale, was relatively costly, slow, and hampered by capacity limitations. Then came the information superhighway; a metaphor taken from the transportation space. The digital highway swept away these barriers by providing a standardized pathway for data transmissions that encircled the world. With a modest investment in equipment, any organization could join the highway. The speed and volume of data flows grew exponentially, as did the rate of innovation in data communications.

The Physical Internet is a “superhighway” for the movement and storage of physical objects. It was originally proposed in 2011 by Benoit Montreuil, currently the Coca-Cola Material Handling & Distribution Chair and Professor, Georgia Tech in the U.S. Since then the idea has gained many proponents, and the Third Physical Internet Conference will take place on August June 29 to July 1, 2016, at Atlanta, U.S. Hundreds of people from across the globe representing many industries are expected to attend the event.

In Europe, the Alliance for Logistics Innovation through Collaboration (ALICE), launched by the European Commission in 2013, has adopted the concept and is working towards a real-world Physical Internet by 2050.

The Zaragoza Logistics Center (ZLC), Zaragoza, Spain, one of the ALICE founders, is researching the horizontal collaboration and dynamic business models that will be required as the Physical Internet takes shape. Horizontal collaboration requires disparate logistics organizations to cooperate on increasing the efficiency and sustainability of freight transportation. In order to evolve towards a real-world Physical Internet the changing roles of key players and stakeholders will have to be integrated, and dynamic business models are needed to achieve this integration.

ZLC is also working with MHI, the largest material handling logistics, and supply chain association in the U.S., to promote horizontal collaboration concepts and practices. MHI has created a community of industry thought leaders called the U.S. Roadmap for Material Handling & Logistics that is advancing the Physical Internet concept. ZLC and MHI are also conducting a study to identify possible international synergies between organizations. For example, a comparison of horizontal logistics practices in the U.S. and the European Union is part of the study.

But garnering support for the concept is only the first step; now comes the job of building a real-world global logistics system based on common standards and worldwide interconnectivity.

This will require an open market for freight transportation, as well as open, configurable and shared distribution networks. Goods will be carried in modular, standard and smart containers equipped with “smart” technology that enables every unit to be precisely tracked. Products will need to be designed to fit into these containers in order to capture huge gains in improved space utilization and cargo handling productivity. The design of shared infrastructure such as logistics centers also will have to comply with the system’s requirements. Harnessing the achievements of technological innovations such as the Internet of Things is also important, especially in areas such as supply chain visibility. And, of course, industry and regulators will need to develop global protocols for the system’s operation.

These challenges are daunting. Moving goods through a universal network rather than many small, independently operated networks, is a very different proposition than moving bits and bytes in this way. There are physical limitations in freight logistics that do not exist in the world of electronic communications. Developing a global consensus on operating standards in the logistics space presents some unique difficulties as well.

Achieving the level of collaboration needed to evolve towards a fully functional Physical Internet will require a profound change in business and managerial mindsets. Companies will have to redefine the competitive landscape as they join forces with other enterprises – including their rivals – to develop the Physical Internet.

Can the dream be realized? Given what the Internet has achieved, and the rewards that a real-world Physical Internet could bring, the answer is surely yes.

But overcoming obstacles like these will require the influence of resourceful organizations that span countries and industries. These organizations can serve as triggers, and they could be a private-sector, first-mover player with a global reach such as Amazon.com or Ali Baba or a government. Perhaps a group of retailers that is grappling with similar challenges as the enterprises transition to omnichannel supply chain models could fulfill the role of Physical Internet facilitator. After the trigger organizations take effect, it will be necessary to scale up the effort with the addition of a wider range of players.

The logistics industry has already taken some baby steps in laying the groundwork for the Physical Internet. For example, Amazon.com has partnered with the U.S. Postal Service to deliver packages to Amazon customers seven days a week. This horizontal partnership requires the organizations to align their huge distribution networks. Also, Amazon is dynamically redefining the competitive landscape in which it competes. The online retailers recently announced plans to open physical book stores, for instance.

Creating the Physical Internet will require an unprecedented level of cooperation and resources, but it’s a journey that is worth taking.