Reducing the time it takes to get an order to a customer’s home and replenish its stores is every companies desire, but while faster fulfillment and small order sizes make customers, and store managers happy, faster fulfillment comes at a cost. By Russ Meller | Supply Chain 247

The bar has been raised. Almost every company is working to reduce the time it takes to get an order to a customer’s home or to its stores.

They are following Amazon’s lead in offering next-day, and even same-day delivery.

While Amazon is in the news, this is not just an e- commerce arms race. Companies are moving faster to replenish their stores too, in order to keep less inventory at each retail location and cut inventory across the entire network.

It’s not just cycle and fulfillment times that are changing; there has also been a fundamental change in the profile of those orders being fulfilled. E-commerce orders are typically one to two items. Store replenishment order profiles are also getting smaller, and are beginning to resemble e-commerce orders, as stores receive cartons and mixed cartons several times a week rather than pallets and mixed pallets less frequently. One specialty retail client now carries only a single unit of its slowest-moving products on its retail shelves.

Yet, thanks to a faster store replenishment model, the retailer has increased its in-stock position from 90 percent to 97 percent while decreasing inventory by 25 percent. As with e-commerce, single item and partial case orders are harder and more expensive to process. Any company in the retail or industrial fulfillment business has to balance the competitive pressures to satisfy its customer expectations while minimizing the costs of extra handling and speedier delivery. We believe the following methodology demonstrates that an investment in faster fulfillment can deliver a competitive advantage for a wide variety of companies.

A Model for Considering Faster Fulfillment 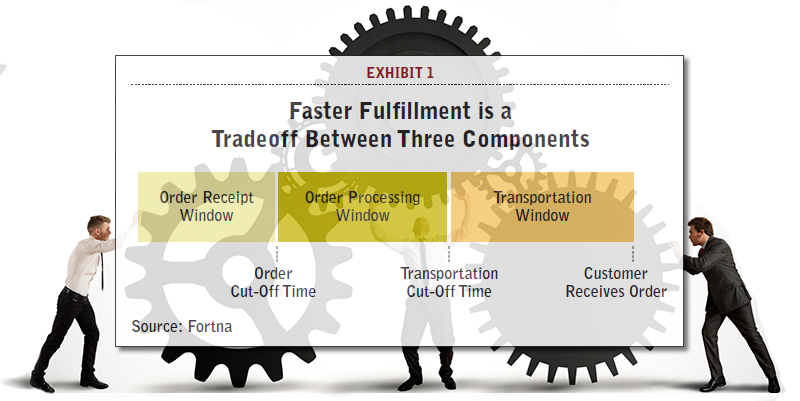 The three components are defined as follows:

With this model, it is clear that faster fulfillment (i.e., shortening the Order Processing Window) will allow a company to move the order cut-off time to the right (and a later cut-off time provides better service to customers) and/or move the transportation cut-off time to the left (doing so will allow access to a larger market or may allow for a reduction in transportation costs). Which response a company chooses depends on many factors, from the strength of its brand, to its average price per unit, to the competitive environment, as well as the cost to achieve a particular order processing window.

Fast, Yes, But at What Cost?

Faster fulfillment makes a lot of people happy. Marketing people are thrilled to offer later cut-off times to grow their online business. They also like that their stores are replenished more often.

But as we stated above, faster fulfillment and smaller order sizes come at a cost. In fact, an article in the Wall Street Journal estimated that filling e-commerce orders can run as high as 25 percent of sales for retailers that outsource their fulfillment. Moreover, high-profile retailers such as Kohls, Walmart, Target, and Best Buy are seeing reduced margins or outright losing money on e-commerce sales. While faster fulfillment and replenishment are becoming the cost of doing business, the CFO might not appreciate why distribution costs are going up compared to the good old days of weekly fulfillment in bigger batches of cartons and pallets.

The impacts go beyond distribution. It may also require you to:

The reality of all of this is hitting home. How do companies get thousands of smaller orders accurately picked, packed, and on the back of a truck before that crucial “order cut-off” time? And how do they pay for it all?

While a significant investment may be needed to speed up fulfillment, there can be significant benefits, too. The problem is that those benefits often lie outside the area of the company that is incurring the cost to make it happen. To justify investments, you and your CFO have to take a very broad look at the benefits – beyond your distribution operations – in purchasing, forecasting, sales, and inventory management.

Faster order processing that cuts expediting fees. Some companies are forced to expedite a fair percentage of shipments to meet their service-level commitments and delivery promises. By speeding up fulfillment, they may be able to ship orders using less expensive shipping options and cut their transportation costs.

More frequent fulfillment that reduces inventory. In retail replenishment, the benefits are equally appealing. When a retail store is confident it will receive replenishment orders quickly, it is freed from the burden of keeping high levels of inventory as safety stock. Across a distribution network, that can result in a significant reduction in inventory and significant savings. By speeding up fulfillment, decisions about where to deploy inventory can be made later in the process, increasing the chance that product ends up in the place where it’s most needed to meet demand. Utopia is a “sell one, replenish one” model, where a purchase today sparks a replenishment by tomorrow, or even today.

Take for example a sporting goods company that made an investment to reduce its order lead time. This resulted in the distribution center providing better service to the retail stores. That was the planned benefit. The virtuous cycle? Over time, due to the better service, store managers began to keep less safety stock because they knew they could get any item replenished the next day.

Along with these changes, less safety stock at the stores freed up space in the backrooms and on store shelves, which was redeployed to offer a broader array of products and hence, additional revenue. Meanwhile, the backroom was redeployed to enable “ship from store” orders that further improved fulfillment time to local customers and helped the retailer sell through inventory and avoid markdowns. A snowboard in a store in Virginia might be shipped to a customer in Colorado rather than get marked down at the end of the season. In short, the long-term payoff is broader as short-term improvements build on each other.

How you develop a business case for faster fulfillment is based on the factors listed above in conjunction with the decision on whether to move order cut-off times, transportation cut-off times, or both.

As examples, here are three case studies of companies that found a positive ROI in faster fulfillment based on the broader business case. The case studies will be contrasted by showing the leverage points of order cut-off time and transportation cut-off time. 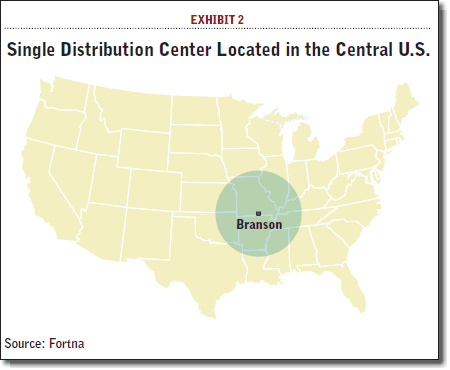 This regional pharmaceutical distributor has a single distribution center located in the central U.S. (Exhibit 2, not their actual location).

In this market, next-day delivery is essential, with most hospitals requiring that their orders arrive by 6 a.m. the next day. With an order cut-off time of 7 p.m., and a four-hour order processing window, that gave them from 11 p.m. until 6 a.m. to deliver their goods. This seven-hour transportation window gave them a range, or market size, of approximately 350 miles around their distribution center.

After careful analysis, they invested in distribution center automation to shrink their order processing window. They implemented two different highly automated solutions for their fast-movers and slow-movers that allowed them to process a large number of small orders at a low operating cost. The solution they chose processed over 2,400 orders an hour – a significant improvement over their manual picking process.

The items in each zone were picked concurrently and the totes were consolidated into a complete order at the end, cutting the processing time.

They chose to invest some of that two and a half hour savings into moving their cut-off time one hour later to make them more in line with competitors. The net impact increased the Transportation Window by 90 minutes (Exhibit 3). 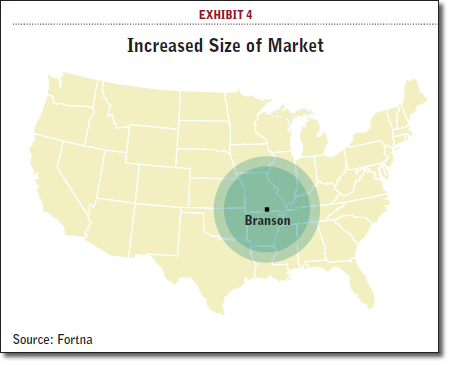 With the longer transportation window, the company’s trucks could travel an additional 75 miles before the 6 a.m. delivery time to hospitals.

That additional 75 miles increased the size of the market they served by nearly 50 percent, including some key metropolitan areas, and helped them acquire new accounts (Exhibit 4).

The additional customers brought about by these changes boosted revenue by over $100 million annually. 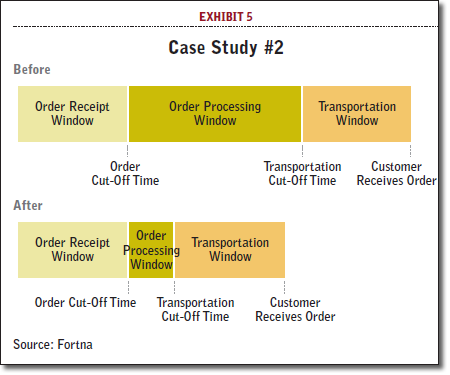 This off-price outlet buys in bulk when they find great deals on clearance and off-season merchandise. That inventory comes to a central distribution center where it is allocated and then transported to each individual retail store.

The retailer has ownership of approximately $250 million of inventory, with about 10 percent of that “in process” in their distribution center at any point in time.

With time-consuming manual processes like double sorting (by color and size) and value-added services like inserting hangers, the Order Processing Window was a lengthy eight days (Exhibit 5).

If the retailer could cut Order Processing Time to two days, taking six days out of the process, it could significantly cut inventory levels and the associated investment.

To do that, existing manual operations required significant changes. The retailer implemented:

All in all, approximately $9 million was spent on the upgrades, with roughly 75 percent on materials handling equipment and 25 percent on software upgrades. But the results included a permanent reduction of almost $6 million in inventory holding costs, freeing up that capital to be reinvested in the business. 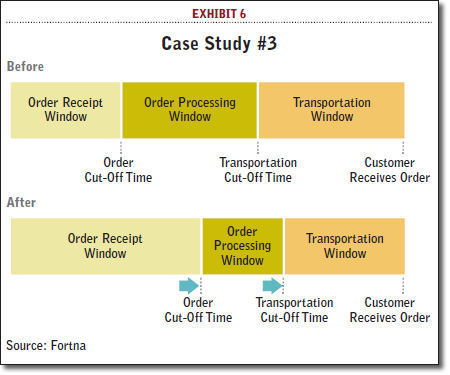 This large electronics distributor competes by focusing on high-end customer service. Customers, who use their equipment in the manufacture of their own products, are willing to pay for this added service. This distributor goes so far as to offer a money-back guarantee if items are not received the next day.

Their goal was to have the latest order cut-off time in the industry – as late as 8 p.m. in some markets – and still meet their promise of next-day delivery. With over 600,000 items in their distribution centers, this was an aggressive goal.

To meet this aggressive order cut-off time, they implemented:

The investment in technologies and process improvements across four distribution centers totaled over $24 million. But the late order cut-off time and the service promise of “next day delivery on qualifying orders placed before 8:00 p.m.” contributed to the company doubling its revenue over the past few years (Exhibit 6). Moreover, implementing these new technologies and services resulted in a 70 percent gain in productivity with no corresponding increase in distribution costs.

With all the talk of drones, ship from store, and same-day delivery in urban areas, it’s unlikely we’ll see a cease fire in the arms race for fast, faster, and fastest fulfillment any time soon. If anything, the stakes will continue to get higher.

At the same time, based on the experience of major retailers like those cited by the Wall Street Journal, faster fulfillment comes at a cost and has far-reaching impacts beyond distribution operations.

The winners in the arms race will be the retailers and distributors who can control their costs even as they speed up their fulfillment operations. The best – those who make investments in fulfillment – will gain a competitive advantage in the market.

The first step is to quantify the benefits that faster fulfillment will bring. To do that, you need to look broadly – beyond the distribution center and beyond supply chain. You need to find the justification for the investment outside of the area of the company that will incur the cost to make it happen.

But don’t doubt that the benefits can be justified. Faster fulfillment, when executed correctly, can lead to significant inventory benefits, fewer markdowns, later cut-off times that attract more customers, and a more consistent fulfillment process overall. When these benefits start to show up, a virtuous cycle begins that accelerates those benefits even more by lowering costs at the distribution center.