The LPI and its supply chain related components help countries understand the challenges that they and their trading partners face in making their national logistics perform strongly.

The gap between the countries that perform best and worst in trade logistics is still quite large, despite a slow convergence since 2007, according to a new World Bank Group report. This gap persists because of the complexity of logistics-related reforms and investment in developing countries, and despite the almost universal recognition that poor supply-chain efficiency is the main barrier to trade integration in the modern world.

The report, Connecting to Compete 2014: Trade Logistics in the Global Economy, ranks 160 countries on a number of dimensions of trade—including customs performance, infrastructure quality, and timeliness of shipments—that have increasingly been recognized as important to development. The data comes from a survey of more than 1,000 logistics professionals. The World Bank Group’s International Trade Unit has produced the Logistics Performance Index (LPI) about every two years since 2007.

“The LPI is trying to capture a rather complex reality: attributes of the supply chain,” saidJean-François Arvis, Senior Transport Economist and the founder of the LPI project. “In countries with high logistics costs, it is often not the distance between trading partners, but reliability of the supply chain that is the most important contributor to those costs.”

In the 2014 LPI report, Germany showed the world’s best overall logistics performance. Somalia had the lowest score. As with previous editions, the 2014 report finds that high-income countries dominate the world’s top-ten performers. Among low-income countries, Malawi, Kenya, and Rwanda showed the highest performance. In general, the trend across past reports has been that countries are improving and low-performing countries are improving their overall scores faster than high-performing countries. 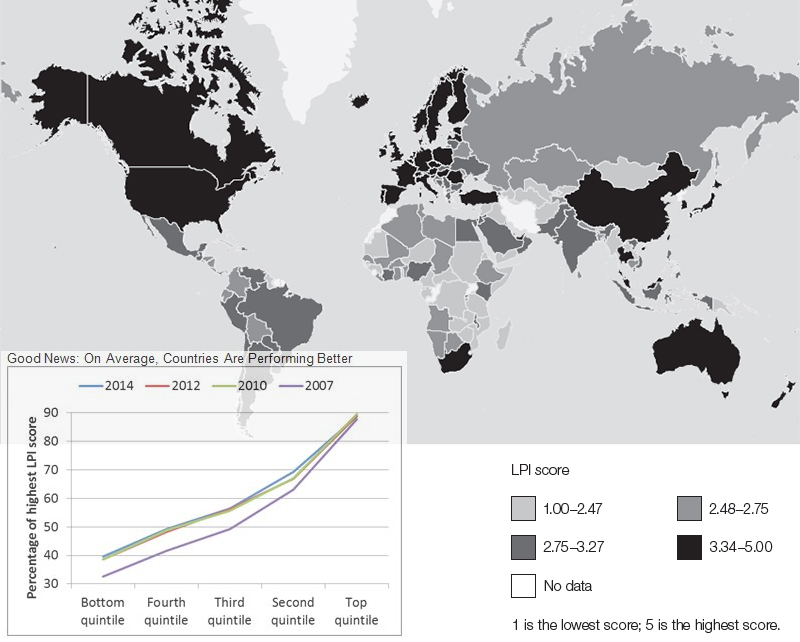 The 2014 report finds that low-income, middle-income, and high-income countries will need to take different strategies to improve their standings in logistics performance. In low-income countries, the biggest gains typically come from improvements to infrastructure and basic border management. This might mean reforming a customs agency, but, increasingly, it means improving efficiency in other agencies present at the border, including those responsible for sanitary and phyto-sanitary controls. Often, multiple approaches are required.

“You can’t just do infrastructure without addressing border management issues,” Arvis said. “It’s difficult to get everything right. The projects are more complicated, with many stakeholders, and there is no more low-hanging fruit.”

“The LPI is a concrete tool for raising awareness and spurring improvements, it allows us to evaluate constraints across a broad set of countries”Jeffrey Lewis, Director of the Economic Policy, Debt and Trade Department

Middle-income countries, by contrast, usually have fairly well-functioning infrastructure and border control. They generally see the biggest gains from improving logistics services, and particularly outsourcing specialized functions, such as transportation, freight-forwarding, and warehousing.

In recent years, as tariffs have dropped globally, logistics and other aspects of trade facilitation have gained profile as an arena for reducing trade costs. A 2013 study by the World Bank Group and World Economic Forum found that reducing the high transactions costs and unnecessary red tape faced by traders could provide a significant boost to global GDP. In January, the World Trade Organization (WTO) finalized a “trade facilitation agreement” that sets standards for faster and more efficient customs procedures and contains provisions for technical assistance and training in this area. The World Bank and six other multilateral finance institutions supported the WTO’s efforts in a unified statement in October.

In this broad context, the LPI is increasingly respected by policy makers. In Indonesia, for example, the index is formally used to measure the trade ministry’s performance. The Asia-Pacific Economic Cooperation (APEC) organization uses the LPI to measure the impact of an initiative to improve supply-chain connectivity. The EU Commission has used the LPI in its Transport Scoreboard and in its 2013 evaluation of the EU Customs Union.

“The LPI is a concrete tool for raising awareness and spurring improvements,” said Jeffrey Lewis, Director of the Economic Policy, Debt and Trade Department. “It allows us to evaluate constraints across a broad set of countries.”

Caveats: The LPI can provide a reference point, but it should not be considered an exhaustive diagnostic tool. The LPI is sometimes compared to the Doing Business ranking – and has some topical overlaps – but it differs in a number of ways. While Doing Business uses data on regulations that are “on the books,” the LPI uses survey data from logistics professionals who answer questions about their experiences in various countries. This approach is an effort to more accurately capture the day-to-day reality faced by the private sector.