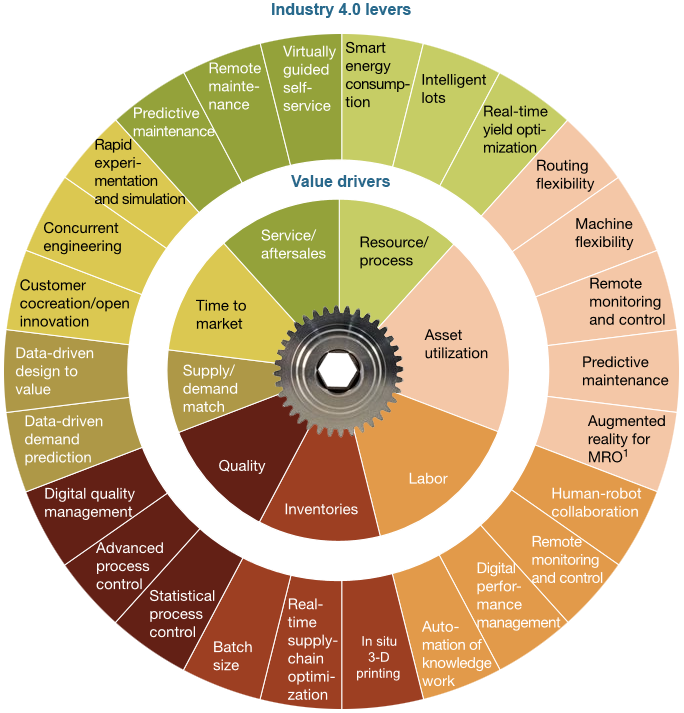 “Imagine a world,” writes Mary Shacklett (@MaryShacklett), President of Transworld Data, “where smart systems, Internet of Things (IoT) sensors, and robotics combine to automate large areas of manufacturing, linking wired and wireless networks throughout the world in the making of products, and relying on both structured and unstructured big data to get the job done.”[1] What Shacklett is describing has been labeled the 4th Industrial Revolution or Industry 4.0. McKinsey & Company analysts, Cornelius Baur and Dominik Wee, define Industry 4.0 as “as the next phase in the digitization of the manufacturing sector, driven by four disruptions: the astonishing rise in data volumes, computational power, and connectivity, especially new low-power wide-area networks; the emergence of analytics and business-intelligence capabilities; new forms of human-machine interaction such as touch interfaces and augmented-reality systems; and improvements in transferring digital instructions to the physical world, such as advanced robotics and 3-D printing.”[2]

Baur and Wee assert that Industry 4.0 derives its name from the fact that it is the fourth transformation of manufacturing in the modern era. They observe, “This is the fourth major upheaval in modern manufacturing, following the lean revolution of the 1970s, the outsourcing phenomenon of the 1990s, and the automation that took off in the 2000s.” Dr. Tuan Nguyen adds, “In a nutshell, the 4th Industrial Revolution is a world where machines are intelligent, networked, and can communicate with each other and with humans. It is the ramifications of this connectivity that has the academic and analyst worlds excited.”[3] To dig a bit deeper into the components of Industry 4.0, I’ll use the four components described by Baur and Wee, namely: data volumes, computational power and connectivity; analytics and business-intelligence capabilities; human-machine interaction; and improvements in transferring digital instructions to the physical world.

Since it will be connectivity that generates enormous volumes of data requiring cutting edge computational power to analyze, that’s where we should start the discussion. The network that will connect smart machines is most often called the Internet of Things (IoT). The IoT is expected to connect billions of machines and generate so much data that the term “big data” will seem quaint. Clearly, new methods of analyzing all of that data for actionable insights will be required; which is why Baur and Wee believe that computational power is one of the critical components of Industry 4.0. Accenture analysts believe that cognitive computing systems are going to provide “the ultimate long-term solution” for many of businesses’ most nagging challenges.[4] As President and CEO of a cognitive computing company, I certainly agree with that assessment. Cognitive computing systems can handle many more variables that other kinds of systems (as well as the deal with the variety of data sources that will be involved). Shacklett underscores the importance of being able to integrate and analyze data, she writes, “To execute the smart manufacturing vision, enterprise systems must be modified so they can interface with and monitor IoT sensor-based technology, along with a host of disparate manufacturing, logistics, procurement, order, and other systems that must be integrated into a single back plane system. From an IT perspective, the task can be daunting.”

Dr. Andrew Dugenske, Director of the Factory Information Systems (FIS) Laboratory at the Georgia Institute of Technology, and his colleague, Dr. Alain Louchez, the Managing Director of Georgia Tech’s Center for the Development and Application of Internet of Things Technologies (CDAIT), believe the IoT and Industry 4.0 will transform “the manufacturing process from a patchwork of isolated silos to a nimble and seamless whole fully integrated with the downstream and upstream production environment.”[5] The transformation they describe will primarily result from the analysis of data that is used by machines to make routine decisions. Bain analysts, Michael C. Mankins and Lori Sherer (@lorisherer), assert that if you can improve a company’s decision making you can dramatically improve its bottom line.[6] To improve decision making, many companies are turning to cognitive computing for help. Employing a management by exception paradigm, companies automate routine decisions and smart machines alert managers when human intervention is required to resolve anomalies. One of the toughest challenges a company will face is determining which decisions to automate.

Although a number of jobs are going to be lost to automation, I believe that Industry 4.0 will be characterized by human-machine interaction. David Hummels, a professor of economics at Purdue University, believes humans still have a unique advantage that machines may never be able to emulate: our ability to respond to other humans. “We have evolved over 100,000 years to be exquisitely perceptive to visual and aural cues from other people around us,” Hummels states, “which is an important skill that machines may never be able to match.”[7] That’s why human/machine symbiosis is a much more likely future than one completely dominated by machines.

Shacklett notes, “For big data, the move to smart manufacturing systems will be transformational. Big data will be called upon to ‘run things,’ and not just to deliver analytics.” Technologies such as advanced robotics and 3-D printing will play a significant role in Industry 4.0 because they can turn data into action. Baur and Wee agree add, “One kind of lost value that is sure to interest manufacturers is process effectiveness. Industry 4.0 offers new tools for smarter energy consumption, greater information storage in products and pallets (so-called intelligent lots), and real-time yield optimization.” Automation, the ability to transfer digital instructions to the physical world, lies at the heart of Industry 4.0. The following chart, prepared by Baur and Wee, shows how Industry 4.0 solutions can be used to make traditional business activities more effective.

Baur and Wee observe, “To get the most out of Industry 4.0 technologies, and to get past square one with a digital business model, companies will have… prepare for a digital transformation.” Some analysts believe that to succeed in the future every company will have to transform into a digital enterprise.