For decades, many warehouses and distribution centers have filled orders on the basis of “waves” of orders grouped together as a set for processing by a DC’s labor and equipment resources.

While wave-based fulfillment can be productive and effective, for DCs with multiple automated materials handling systems, keeping all the automated zones in sync – and workloads balanced – can be problematic and lead to throughput issues.

The root cause of these problems, according to providers of warehouse execution system (WES) and warehouse control system (WCS) solutions, is a lack of real-time awareness of what is happening on the DC floor.

Since waves traditionally are devised based on rules managed by higher-level software such as warehouse management system (WMS) solutions that aren’t directly tied into automation, the system responsible for the wave management lacks a real-time awareness of the status of equipment and material flow on the DC floor.

Even if a WMS is integrated with a WCS or conveyor controls for processing waves, if the WCS layer isn’t aware of real-time conditions across all zones and lacks its own logic for releasing work to the floor in a dynamic fashion, it can be difficult to avoid bottlenecks, some suppliers say.

“Tier 1 WMS solutions simply don’t have tight interfaces [to materials handling equipment] as part of their offerings to provide the type of real-time integration with the whole facility,” saysJohn Harrell, director of software solutions for SI Systems, a WES supplier.

WES providers have emerged over the last few years to address the complexities of order fulfillment in today’s DCs. Their suites typically are built on a WCS core, which is combined with some higher-level inventory control and order fulfillment applications. These higher-level apps may have configurable rules that make use of real-time insight to enable processes such as waveless fulfillment.

The WES vendors walk a fine line in their relationship to best-of-breed WMS vendors. Most WES solutions are modular – meaning they can have their higher-level order processing functions turned off to serve a more conventional WCS role in conjunction with a WMS. But when it comes to newer approaches to releasing work to the floor that are more dynamic, WES vendors contend end user organizations need a solution that tightly combines WES’s order processing logic with WCS-based visibility into what’s happening on the floor.

WMS solutions carry out many functions extremely well, but as Harrell explains, “it can’t have the same type of real-time intelligence as a system that is completely integrated with the low-level controllers and can also be responsible for wave management as well as all of the directing and orchestrating that involves.”

Other WES vendors agree this real-time awareness, which comes from WCS, is a key ingredient to continuous order releasing. WMS on its own lacks this situational awareness, says Mike Howes, vice president of software engineering and services with Forte Industries.

“So if we are talking automated conveyor systems, for example, the WCS knows the utilization of pick areas or zones,” he says. “It knows the amount of containers on the system at any moment and where they are destined to go. Traditionally, a WMS would not know that type of information. It wouldn’t have had that real knowledge of the overall system and how it’s actually performing.”

Just what does waveless mean, though, and how does it differ from traditional wave releasing? Essentially, a wave is a grouping of orders or groups of orders that are preselected based on characteristics that would make them easier to pick and process as a set. For instance, a wave may group orders based on customer promise date, similar sized SKUs, rack locations, or some other logical grouping that makes the orders easier to fill because of less travel for pickers or other factors.

A couple of key trends have made processing of waves a lot tougher over the last several years. For one thing, e-commerce and multichannel fulfillment have driven the need to process a greater number of smaller orders, often at the item level. Meanwhile, to keep DCs efficient at item picking and material flow, DCs have added more automated systems such as pick-to-light systems, carousels, automated storage and retrieval systems, and more packing stations and automated conveyor to support the greater output enabled by additional automation.

The trouble is, orchestrating all of these islands of automation to smoothly process static waves can be difficult when conditions start changing on the floor, such as accumulation conveyor getting overloaded or pack stations that lack enough work. Additionally, when waves are planned overnight and need to be completed as a set that means less flexibility in meeting the tighter fulfillment windows that come with e-commerce.

A different way of handling order releasing is to release orders and tasks on a more dynamic, continuous basis. To accomplish that, say WES vendors, end user organizations need order processing functionality paired with WCS’s near-real-time insight into the status of equipment and material flow. “To be 100% waveless, every time a unit of work has made it to its next destination, you should be able to automatically induct a new unit of work into the system,” says Harrell.

A WES solution for waveless, says Harrell, should have configurable rules that manage this sort of continuous release of work to the floor, so that, “the very next item that gets released and inducted into the system must be the absolute best candidate to start being processed at that precise moment, based on the conditions with your automated systems and based on where every other unit of work being processed happens to be.”

Other WES providers agree that waveless is best thought of as dynamically releasing tasks to the DC floor continuously, based on real-time conditions. This has driven providers of WCS to morph into WES vendors with order-release logic.

“WCS is getting smarter because warehouses are expected to do more,” says Chris Castaldi, manager of business development with W&H Systems. “Now, the connections are more real time. The WMS will constantly send down order information to the WCS layer and [WCS] will decide how to shuffle the work.” 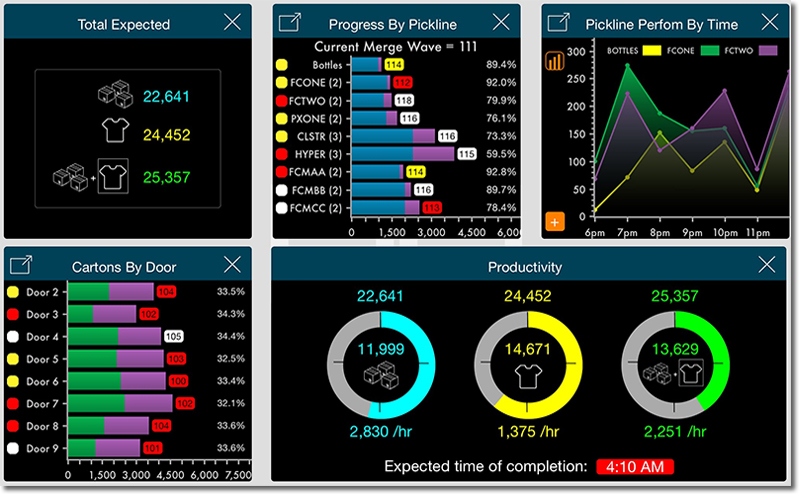 For some DCs, says Castaldi, traditional waves still make sense. For example, in beverage distribution where trucks are being loaded for direct store delivery, there needs to be some preset grouping of how orders will be processed so that the delivery trucks are loaded in the correct sequence for unloading at each store destination. WCS and WES functionality can bring more precision to managing waves as well, adds Castaldi, so its benefits aren’t just about waveless.

“There are some cases where those waves are important,” Castaldi says. “You have to make sure your environment is suited to waveless.”

While there are companies that express interest in waveless operations, the most common reason companies are looking into WES is that they aren’t getting optimal throughput from their materials handling system investments, says Nancy Malone, software business development manager for viastore. “It’s really more about throughput concerns than about waveless,” says Malone.

Viastore offers a software suite that combines WMS and WCS functionality in an integrated way so that order releasing and the scheduling of picks and tasks can be synchronized with the status of materials handling systems and labor resources.

The suite can manage waveless, says Malone, or a more conventional approach with waves. The key thing, says Malone, is to have a system that is aware of equipment status and resource availability and can use that real-time insight to break down order information into tasks and picking operations that keeps the pace of work balanced. 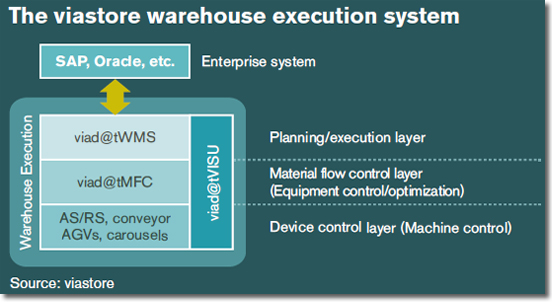 “When orders come into the system, we release tasks to the downstream work centers, whether that’s a pack station or some other type of operation, in a way that keeps the level of work balanced across all the areas, and that keeps the workers busy. That’s really what we are after: A way to keep the work balanced and keep workers constantly busy, while meeting customer requirements.”

Viastore’s WCS can be used with a best-of-breed WMS, says Malone, but exactly how the duties are split between WMS and WCS, and the amount of data that needs to be shared, can vary by customer deployment. In some instances, the WCS/WES solution may have higher-level inventory management duties, in which case it needs to have more WMS-level information such as warehouse slotting.

Productivity Is The Goal

For many DCs, the issue isn’t really waveless versus waves, but rather, how to keep operations level and productive, says Jeff Ross, vice president of consulting with Forte Industries. New styles of order releasing, which are continuous, are often driven by this need to keep the workload steady. “If we can balance the workload between zones, and keep everyone with an even flow of work, then the true capacity and performance of the distribution center can be achieved,” Ross says.

The need to keep throughput high and workloads balanced drove a client of Forte’s to recently implement a waveless operation, says Ross. The client, a pharmaceuticals industry company, uses Forte’s WES solution to dynamically release individual orders to the floor and process them based on real-time conditions. The DC uses a WMS to handle receiving, putaway and replenishment, but order information is passed to Forte’s solution to manage order releasing.

The WCS module of the system uses scans of totes to track material flow in real time, while its ties to equipment such as an automated tote stacker, automated conveyor, and pack stations add to its real-time understanding of utilization rates in each area, and how previously released work is progressing through the DC and out to packing and manifesting areas. “We are balancing the capacity of the overall system so that a flood of work – bottlenecks – does not occur,” says Ross.

The waveless approach enabled by WES, adds Ross, drives high, steady utilization for the DC’s systems and also gives management a better foundation for assessing worker productivity. If workers in picking or packing areas are left starved for work, or are constantly being shifted from one zone or another to alleviate bottlenecks, it’s unfair to blame them for poor productivity, says Ross. “It’s hard to hold employees to a performance expectation when you don’t manage to keep work in front of them,” he says.

From the view of WES vendors, the need to keep workloads smoothed and balanced in increasingly complex environments is a good fit with WES’s functional footprint, which combines order processing and wave management functions with WCS’s up-to-the-second grasp of conditions. As SI Systems’ Harrell sums up WES capabilities when it comes to waveless: “it’s the perfect marriage of knowing what order components should start into the process and complete the process, with knowing the exact materials handling conditions.”