With the global economy seeming to be in better shape than for many years, it would seem a good point at which to examine prospects for the global logistics industry. Economics and logistics output are, of course, inextricably linked. By John Manners-Bell & David Buckby, February 03, 2014, Supplychain247.com

Economists believe that emerging markets will continue to grow faster than developed economies throughout the rest of the year.

However, the performance of the Western world will improve in 2014 while emerging market growth will not be quite as impressive as it has been.

As economic output will impact positively on the volume of freight being moved – and this will improve profitability in many sectors where capacity and demand are in some sort of alignment – this is good news for logistics companies.

Conclusion 2014 is set to be a very good one for the logistics sector, with the possible exception of the air cargo operators and shipping lines. Overwhelming supply side issues will need to be addressed before they can benefit from the demand-side upturn. For freight forwarders we may see a ‘golden year’ with rates still low but volumes increasing.

Stronger consumer sentiment in the US and Europe will benefit downstream distribution companies and the continued rise of e-commerce will drive forward express parcels carriers. Tapering of quantitative easing policies will inevitably affect developing economies, but they will also benefit from strengthening demand in the developed world. In Asia, Japan’s return to growth will have a major impact on the prospects of its neighbors.

The shipping and air cargo sectors are special cases, where structural reforms will be needed to benefit from these improving underlying trends. The return to growth of the Eurozone could possibly have the biggest effect with the European road freight sector having most to gain.

Looking at international trade, global volumes stagnated in 2013 although a significant rebound is expected in 2014. Perhaps the most telling statistic is the predicted sharp rise in developed countries’ imports in 2014, reflecting general economic recovery in the Western world.

From these figures it can be seen that the GDP/trade multiplier has, at least temporarily, disappeared. In the past there had been an established correlation between the increase in GDP output and growth in trade. As we have seen, though, the IMF estimated economic output in 2013 to be 3% whilst trade grew at just 2.5%.

One probable reason for this is the change in emphasis of investment decisions which have been focused on domestic growth rather than on international. China, for example, has invested heavily in its domestic economy (infrastructure for example) in order to maintain economic output at its 7.5% target.

There are three major fronts on which trade liberalization may move forward in the near future:

1) The Trans-Pacific Partnership (TPP), under negotiation since 2005, aims to reduce non-tariff barriers such as import quotas and other regulation. It involves 12 countries, which include the United States and Japan, but not China. The deal should be concluded in 2014.

2) The Trans-Atlantic Trade and Investment Partnership (TTIP) between the United States and the EU also aims to reduce non-tariff barriers and harmonize regulation. Leaders hope to be close to the finish line by the end of 2014, with a deal hopefully finalized in 2015.

3) Perhaps most significantly of all, the multilateral trade deal agreed in Bali in December 2013, which was the result of 12 years of negotiation since the “Doha round” began in 2001, will reduce tariffs and other trade barriers. According to The Economist, “The trade-facilitation measures agreed in Bali could cut the cost of shipping goods around the world by more than 10%, by one estimate, raising global output by over $400bn a year, with benefits flowing disproportionately to poorer countries.”

One issue which may well worry logistics companies in the developing world is the effect of the US Federal Reserve tightening monetary policy in 2014. The Fed scaled back its quantitative easing program from $85bn in December 2013 to $75bn in January 2013, and it will eventually decline to nothing by the end of 2014. Interest rates may also rise in the year. As rates of return improve in the US, investors will increasingly come back. 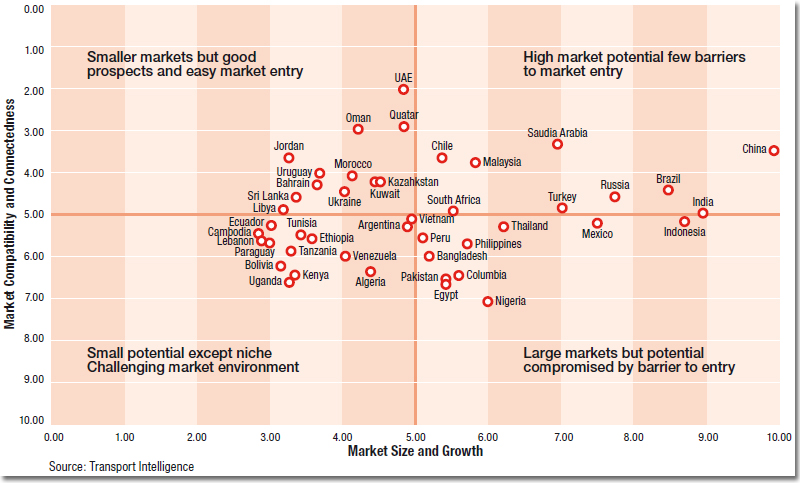 The emerging markets quadrant displays the relative positions of the countries in the Index. The chart is divided into four areas based on size and potential barriers to entry (an average of “market compatibility” and “market connectedness”).

The expectation of monetary tightening arriving in 2014 has been blamed for a number of emerging market currencies depreciating in 2013. For example, the Indian rupee hit a record low in 2013, while the South African rand and Brazilian real hit four-year lows against the dollar in 2013. Almost all Asian economies have experienced sharp depreciation in 2013, with the major exception of China.

Many emerging markets have responded by increasing their own interest rates in an attempt to prevent capital from flowing back to the US and preserving the value of their currency. Higher interest rates in emerging economies are likely to slow down their overall economic growth.  The difficulty as always is knowing by how much emerging market currencies will depreciate, and how much their overall growth will be affected.

The most likely outcome would seem to be a return to the trade pattern established in the 2000s. A strong economy in the US will start sucking in imports from China and Asia, aided by a strong currency. The situation in Europe is not so clear as although the UK is seeing strong growth and the Eurozone is recovering, economies are more fragile and it is doubtful whether currencies will strengthen.

There is also the question of near-sourcing, which is exciting many politicians with the tantalizing prospect of manufacturing jobs returning to developed economies. This will rely on increasing input costs in Asia tipping the balance in favor of production closer to home. Two of the main cost categories are transport and labor.

Transport rates, such as shipping and air cargo, are still floundering due to systemic over capacity in the industry. On top of this oil prices are relatively stable, or even on the slide. The oil price has tended to stay in the region of $100 to $120 a barrel since about mid-2011, with varying degrees of volatility in 2011, 2012 and 2013.

The IMF states that oil prices fell by 0.9% in 2013. It predicts they will fall by 0.3% in 2014. However as usual, the major issue for 2014 will be volatility and this is very hard to predict. On the other hand, China will continue to experience rising labor costs in 2014 and this will make sourcing decisions finely balanced.

Conclusion 2014 is set to be a very good one for the logistics sector, with the possible exception of the air cargo operators and shipping lines. Overwhelming supply side issues will need to be addressed before they can benefit from the demand-side upturn. For freight forwarders we may see a ‘golden year’ with rates still low but volumes increasing.

Stronger consumer sentiment in the US and Europe will benefit downstream distribution companies and the continued rise of e-commerce will drive forward express parcels carriers. Tapering of quantitative easing policies will inevitably affect developing economies, but they will also benefit from strengthening demand in the developed world. In Asia, Japan’s return to growth will have a major impact on the prospects of its neighbors.