Choreographing the movement of global trade is no easy task. Just ask any shipper that jumped into the world market and quickly learned that the typical international transaction involves up to 30 different parties, 200 data elements, and 40 or more documents.

Shippers not only have to juggle those 270-or-so different elements for every transaction, but they’re also tasked with making sure shipments arrive on time, intact, and within budget. To achieve that goal, shippers are replacing their traditional spreadsheet- and fax-based systems in favor of global trade management (GTM) solutions. GTM automates trade activities by seamlessly performing restricted party screenings and embargo checks; assigns export and import licenses; creates and files trade documents; and communicates electronically with customs authorities.

Over the next few pages we’ll take a look at the new role GTM solutions play in the management of international supply chains and transportation networks. Then we’ll hear from a telecommunications services company using GTM to reduce its corporate risk, liability, and exposure to prohibited transactions.

Getting closer to visibility
When Gartner recently conducted a survey of 259 senior supply chain executives to find out their top trends and priorities regarding GTM, the research firm learned that trade compliance ranked as the respondents’ fifth most important supply chain execution (SCE) application. About 25 percent of responding companies have fully deployed GTMs, 10 percent are actively investigating trade compliance solutions, and another 32 percent told Gartner that they partially deployed such solutions. 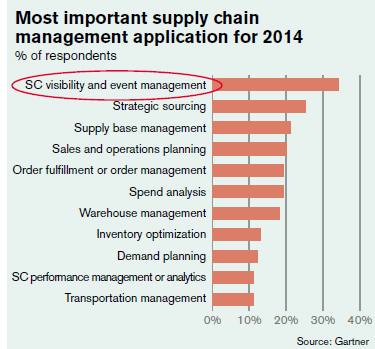 “We found that most enterprises do have some kind of application in place to manage global trade compliance,” says Bill McNeill, senior research analyst for Gartner. “But the data is skewed somewhat by small to mid-sized operations that don’t currently use GTM or that outsource the process to a third party. They tend to drag the adoption rate numbers down.”

Of the shippers that have embraced GTM, McNeill says most rely on their solutions to provide automated compliance and visibility over international shipments—the latter of which allows companies to better control their inventory levels, make better decisions, and provide higher levels of customer service.

On the compliance side, McNeill says shippers turn to their GTM software to handle import and export support, and in particular restricted or “denied” party screening. Such screening involves individuals or countries (or, “restricted parties”) to whom the U.S. government has denied export privileges. Companies that go against the rules and ship to these entitles can be fined or penalized, and may also lose their export privileges.

By automating the trade compliance function, shippers can avoid those fines and penalties while also reaping the benefits of a streamlined global trade management setup—something that the typical exporter can’t achieve using spreadsheets, phone calls, and faxes.

From their deployed GTM, shippers also gain cross-organizational accountability and established processes that allow for easier audits and accountability. “When you use this software you’re creating an audit trail,” Wrobleski adds. “And that’s far easier to track and review than the pieces of paper and spreadsheets that companies used in the past.”

Companies that combine their GTM’s effective restricted party screening with that cross-organizational accountability and improved audit trail wind up one step closer to the supply chain holy grail: improved visibility. “A container that’s stuck in port for an unknown reason or length of time can create significant problems for a shipper,” says Wrobleski. “Global trade software can help companies head off these and other issues by providing improved visibility via dashboards and other tools.”

Inevitable growth
As more companies move into the global market, McNeil expects the GTM market to gain traction both among new users and for those who may be currently outsourcing the function to a third party, such as a third party logistics provider (3PL). 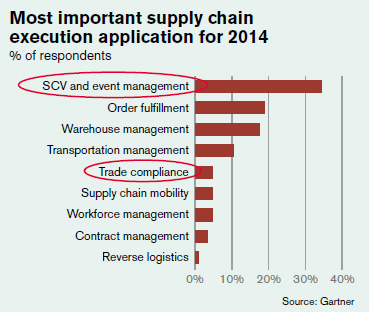 “Our data is pointing to pretty robust growth in this sector,” says McNeil, who hints that GTM sales growth could be in the “low double digits” this year. The continuing economic rebound will buoy sales in the sector, says McNeil, as will shippers’ growing affinity for affordable, easy-to-install SaaS versions of their favorite supply chain software.

“Web-based, hosted options definitely give companies an easier, faster way to get into GTM applications,” says McNeill. “That’s certainly contributing to growth in this particular sector.”

The fact that shippers are ultimately responsible for any fines, delays, or other interruptions of service on the global front will also help to drive the GTM space in 2013, according to McNeill. “Any company that wants to be more customer-centric and provide higher levels of service really needs to take control over the global trade process with technology. Plain and simple,” says McNeil.

A telecommunications service company that provides maintenance and product service solutions to the global telecommunications industry, CTDI of West Chester, Pa., services original equipment manufacturers (OEM) and carriers with 50 international strategic repair and logistics locations that are supported by a team of over 5,000 telecommunications professionals worldwide.

CTDI’s core business includes wireline/wireless repair and logistics, engineering and installation services, global supply chain solutions, and product engineering and manufacturing. As the company’s level of global business has expanded, so has the shipper’s need for a reliable, automated way to handle denied party screening.

“We’re doing third-party repairs in very large volumes that have to be handled in an expedient manner and by many different locations,” says Greg Pugh, customs compliance manager. Up until a few years ago, CTDI’s exports were sent only to its company-owned facilities overseas. “There was no need for screening so we basically handled it all manually,” says Pugh.

CTDI’s international business changed in 2008 when a major customer began requesting direct shipments to its own facilities. Similar requests from other European Union, Asia-Pacific, and Australian clients followed, and would push CTDI to look for a software solution that could manage the compliance aspect of that growing international component. “We looked at quite a few different options to help us ship without delays while still meeting all compliance requirements,” Pugh recalls.

From its GTM, CTDI needed an automated process for restricted party screening when shipping products across international borders for its customers. The software would help CTDI establish whether a party to a shipment was listed on any official denied persons or illegal trans-shipper list, blocked from import or export transactions, or sanctioned by a government for illegal acts. “We needed to prevent any illegal transactions with restricted entities or trade parties,” Pugh adds, “and avoid potential fines and penalties for CTDI and its telecom customers.”

After exploring its options, CTDI selected Amber Road’s RPS On-Demand solution and installed it five years ago. The company uses the solution to screen customers, vendors, and other trading partners against all restricted party lists from worldwide governmental institutions.

Pugh says the application also includes collaboration tools and discussion boards that multiple users from different CTDI locations use to stay in touch as shipments are screened for restricted parties. For example, team members can use the system to access live reports, maintain contact with global branches, and keep users up to date on potential denied party screening matches.

The application can also be “trained” to reduce the number of false positives (or mistakenly assuming Osama Smith and Osama Bin Laden are the same person, for example) that it identifies. “We’re able to configure the system to recognize the problems after one or two potential matches,” says Pugh, “and to minimize the occurrence of false positives.”

CTDI faced some challenges when implementing its on-demand GTM. For example, the fact that the firm’s shipping system is homegrown and doesn’t integrate with outside software made the process tricky, says Pugh, who continues to handle daily downloads of trade party lists manually. “That’s something we probably could have had customized for the GTM,” he says, “but we felt it was more economical to just upload those trade party lists to the server on a daily basis.”

Such challenges aside, Pugh says CTDI is happy with its GTM, which has allowed the company to remain compliant with minimal disruption to its normal business process. The company can accommodate its high volume of shipments; ship directly to international customers with confidence; and reduce any risk, liability, or exposure to prohibited transactions.

“We’ve pretty much centralized an entire process across 50 locations worldwide,” says Pugh. “If one of our locations ships a part to a denied party, we know about it here at headquarters immediately and can take action.”