Analysis shows no correlation between a manufacturer’s total expenditure with a supplier and the cost of a supply disruption. By Denise Brehm December 16, 2013 Supplychain247.com

A new MIT study on supply-chain risk shows no correlation between the total amount a manufacturer spends with a supplier and the profit loss it would incur if that supply were suddenly interrupted.

This counterintuitive finding defies a basic business tenet that equates the greatest supply-chain risk with suppliers of highest annual expenditure.

When applied to Ford Motor Company’s supply chain, the quantitative analysis by Professor David Simchi-Levi of MIT’s Department of Civil and Environmental Engineering and Engineering Systems Division shows that the supply firms whose disruption would inflict the greatest blow to Ford’s profits are those that provide the manufacturer with relatively low-cost components.

“This helps explain why risk in a complex supply network often remains hidden,” says Simchi-Levi, who is co-director of MIT’s Leaders for Global Operations program. “The risk occurs in unexpected locations and components of a manufacturer’s supply network.” 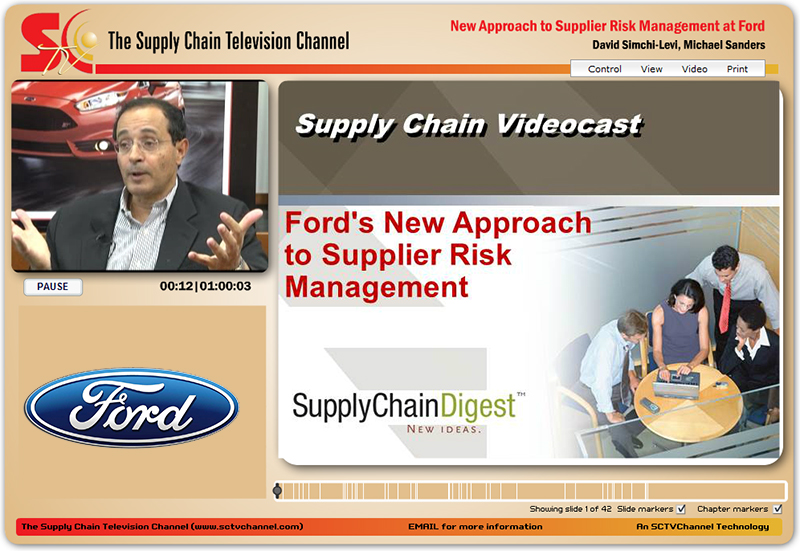 Focus on low-probability, high-impact risk Traditional methods for identifying the suppliers and events that pose the highest risk depend on knowing the probability that a specific type of risk event will occur at any firm and knowing the magnitude of the problems that would ensue. However, risks — which can range from a brief work stoppage to a major natural disaster — exist on a continuum of frequency and predictability, and the sources of low-probability, high-impact risk are difficult to quantify. Manufacturers generally assume their greatest supply-chain risk is tied to suppliers of highest expenditure.

But Simchi-Levi reasoned that because a company’s mitigation choices — maintaining more inventory or an alternative supply source, for example — are the same regardless of the type of problem that occurs, a mathematical model of supply-chain risk should determine the impact to the company’s operations if any disruption occurs, rather than estimating the probability of specific types of risks.

His model incorporates bill-of-material information (the list of ingredients required to build a company’s products); maps each part or material to one or more of the firm’s facilities and product lines; captures multiple tiers of supplier relationships (tier 1 are direct suppliers, tier 2 are suppliers to tier 1 firms, and so on); includes operational and financial impact measures; and incorporates supplier recovery time if a problem occurs.

Highest risk from 2 percent of suppliers When Simchi-Levi, Schmidt, and Wei applied the model to Ford’s multitier supply network — which has long lead times from some providers, a complex bill-of-materials structure, components that are shared across multiple product lines, and thousands of components from tier 1 suppliers — the model predicted that a short disruption at 61 percent of the tier 1 firms would not cause profit loss. By contrast, a halt in distribution from about 2 percent of firms would have a very large impact on Ford’s profits. Yet each of those firms in the 2 percent furnishes Ford with less-expensive components rather than, say, expensive car seats and instrument panels that fall into the high-financial-impact segment.

“The ability to manage and respond to supply-chain disruptions is becoming one of the critical success factors of executives,” says Hau Lee, a professor of operations, information, and technology at Stanford University’s Graduate School of Business, who was not involved in the study. “Addressing low-probability disruptions has often been viewed as black magic, as standard quantitative methods simply do not work. The authors have come up with an innovative, structured approach, so that executives could use a rational decision process to gain control of this problem.”

The relevance of this methodology can be seen in light of a disruption in 2012 at a plant in Europe, which caused a shortage of a polymer used by most manufacturer-suppliers to make fuel tanks, brake components, and seat fabrics. It took six months to restart production, a delay that had a large financial impact on the auto industry. Simchi-Levi’s framework would have encouraged the company to build a second plant in a different region, something the affected company now is doing in Asia.

The application of Simchi-Levi’s model to Ford Motor Company’s supply chain was funded by the Ford-MIT Alliance.