Has the future of oil changed? Or is the dependency on oil here to stay for the long haul? By Larry Lapide, January 21, 2014, Supplychain247.com

This column represents the annual oil update I’ve been writing since my first column appeared in the January/February 2007 issue of SCMR (“Is Your Supply Chain Addicted To Oil?”).

As always, Exhibit 1 depicts quarterly imported crude oil prices from the U.S. Government for close to 40 years. Denoted on the chart is the “Era of Cheap Oil,” which lasted almost 20 years. During that period, “real” (i.e., deflated) oil prices bounced around from $20 to $30 per barrel.

The period also overlapped with the heyday of the Supply Chain Management (SCM) evolution that began in the mid-1990s.

Over this time companies started altering their networks to embrace the integration and globalization of supply chains, leveraging cheap oil to lower costs and inventories.

As can be noted from Exhibit 1, real oil prices have been hovering around $100/barrel since the Great Recession, despite the dismal global economy. Prices are now three to four times higher than they were during the Era of Cheap Oil. 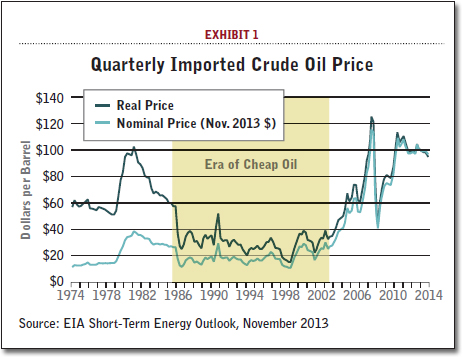 I’ve been postulating that once the economy starts growing more robustly, oil prices would steadily rise with greater volatility well past 2020. This would be due to increased global demand and the need to leverage more expensive oil-drilling methods – such as deep-water drilling and shale-oil fracking (an extraction technique) – in order to meet increasing demand.

Has Fracking Changed the Game?
This past year, however, has been different than discussed in prior updates; bringing to mind a quote from Yogi Berra that goes: “The future ain’t what it used to be.” I’m wondering: Has the future of oil changed?

I’ve thought long and hard about what to say this year because of all the media buzz around shale oil and natural gas fracking as energy saviors, maybe bringing back cheap energy and rendering the big user oil countries less dependent on oil, and less dependent on OPEC and other oil producing countries.

Below are some of last year’s news items: 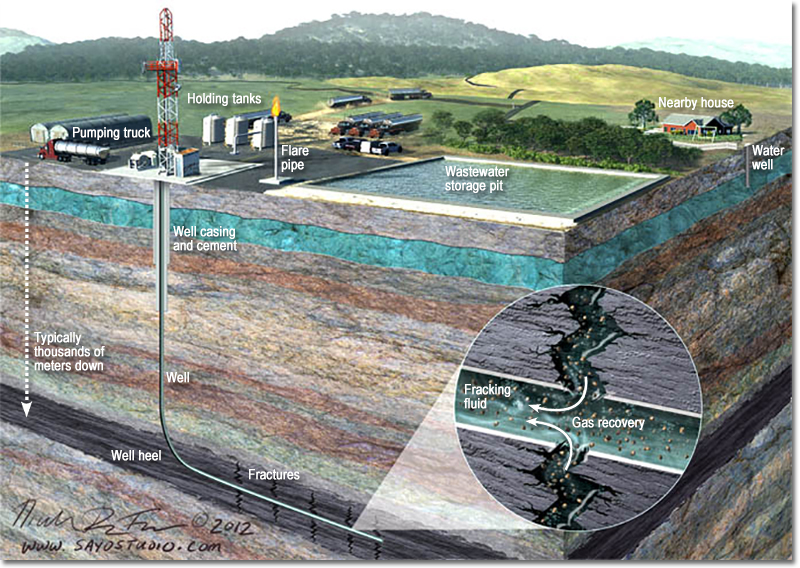 Still Heavily Affected by Oil Pricing
Does the above information say the future energy picture has changed for supply chain managers? I think not. While the long-term picture might change, cheap oil is out of the picture.

In the short term, it won’t change much because it takes years to materially affect and alter supply chains, including the fact that the energy supply chain itself must change. However, while the long-term looks to be rosier re: oil dependency, this too is uncertain and not as optimistic as one might initially think.

Supply chains will still be dependent on the vagaries of oil prices because they will still be using oil or because other energy sources will be priced in lock-step with oil pricing. For the next couple of decades oil will stay the preferred energy source.

Oil dependency will vary in three aspects of SCM:

Much of today’s materials, components, and packaging are oil-based plastics. Over decades there has been a significant shift from being largely composed of glass, metal, and paper to plastic. With the recent rise in oil prices a shift away from plastic to paper-based packaging, for example, has begun. The shift from oil-based will continue indefinitely, and for this aspect, natural gas is not a replacement for oil.

The energy used to operate equipment and facilities is largely electricity with some oil-based diesel. So this aspect does not represent a significant portion of oil-based usage in supply chains. In the long run this minor portion of oil dependency will grow, but will not be the major focus area in which to reduce oil dependency.

Transportation is the major portion of oil dependency for supply chains. Moving goods around represents a sizeable portion of oil usage today, much in the form of diesel. It is clear that the transportation industry is planning to shift as rapidly as possible to LNG fuel.

The question is: How rapidly can that shift really occur? First, the truck manufacturers need to start making natural-gas fueled trucks in large volumes. Long-haul trucks, for example, are still on the drawing board. Then it will take more than a decade to replace the trucks on the road, as well as to establish a network of LNG stations to replace the vast network of diesel-fueling stations.

Therefore the demand for LNG will take decades to come to fruition. Meanwhile on the supply side, LNG has issues in terms of how fast sites are depleting; so more time than originally anticipated might be needed to find and tap into natural gas reserves. In short, looking at the supply-demand picture, it will take decades to shift the lion’s share of diesel to LNG.

To summarize, my view has not been altered by the recent news around fracking. Managers should continue to make their supply chains more energy efficient, because the dependency on oil is here to stay for quite some time.