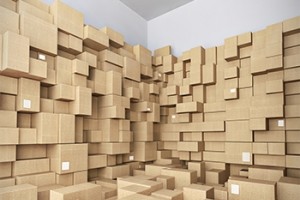 Dimensional “dim” pricing could aid carriers’ profitability but might be difficult to implement because of the variety of shipments that by definition move every day in LTL carriage. Anybody who thinks there is nothing new happening in the $35 billion less-than-truckload (LTL) sector isn’t paying attention to undercurrents in the once-staid, regulatory-bound LTL industry.

Just under the radar, LTL carriers are rapidly investing in expensive, on-dock, three-dimensional size measurement capturing machinery. LTL carriers are hoping one day of being able to more accurately charge shippers rates based on the actual dimensions of their shipments, rather than the traditional weight-and-distance-based formula that has been in effect since the 1930s or even earlier. These dimensional “dim” machines already are being tested by industry giants FedEx Freight, YRC Worldwide, Old Dominion, Saia, and probably many other carriers in the LTL space.

Joel Clum, president of CarrierDirect, a trucking consulting firm, says dimensional pricing could soon “revolutionize” the LTL sector. He says the current weight-based and freight classification system is outdated should be replaced by the dimensional weight approach which is easier to understand and easier to automate.

Others agree, to a point. Satish Jindel, president of SJ Consulting, Pittsburgh, which closely tracks the LTL sector, said dim pricing could aid carriers’ profitability but might be difficult to implement because of the variety of shipments that by definition move every day in LTL carriage. But the LTL sector might be ripe for change simply because of its composition. Unlike the highly fragmented truckload sector where the largest carrier (Swift Transportation) barely has 1 percent market share, the LTL sector has greater consolidation.

The top six LTL carriers (FedEx Freight, YRC regional and long-haul, Con-way, UPSFreight, ABF and Old Dominion) carry more than half of the freight. The problem, as always with trucking, is capacity. Lightweight, bulky LTL shipments tend to “cube out” before they “weigh out” in a traditional 53-foot trailer that is allowed to carry 80,000 pounds.

Right now, there is little penalty for shippers and manufacturers who clumsily package shipments in air-filled boxes that take up excess room in trailers. Twenty pounds of toilet paper costs roughly the same to ship whether it’s in a 10-foot by 10-foot by 10-foot box, or it’s in a box that’s 25-by-25-by-25. That could all change if dim pricing methodologies were instituted by the LTL carriers. Any carrier who encountered, for example, two 10,000 pound shipments of lower classified freight that filled an entire 28-foot or even 53-foot trailer has long coveted a method to raise the revenue for that shipment, or any other shipment that weighed less than 15 pounds per cubic foot.

Also, experts say, this pricing revolution could be implemented only if virtually the entire $35 billion LTL sector moves in lockstep to institute it. Because of antitrust laws and other competitive factors, that could be difficult—and might ultimately lead to lawsuits by reluctant shippers.

Not sure if you’ll get hit with dimensional weight charges? Check out this chart!

By now you have probably heard that major shipping companies are going to drastically increase prices at the beginning of 2015. Logistics and Distribution Centers are about to feel the pinch as both carriers drop their 3-foot cubic allowance and begin charging dimensional pricing on smaller packages.

The information below will help you understand how carriers will calculate dimensional weight as well as provide some tips for saving money in our new shipping environment. It is more important than ever for you gain full control of your shipping process before the new pricing structure goes into effect on January 1st, 2015.

The new rules allow for shipping companies to charge dimensional pricing for packages that are smaller than 3 cubic feet. This will effect up to 77.9% of B2C shipments and 76.9% of B2B shipments. Where will your company’s shipments fit in? You’ll probably want to conduct a full, detailed review of your packaging in order to understand the full magnitude that the change will have. But in the meantime, you can see the chart below to see what size parcels will be affected. This will give you a better idea of whether your average shipment will get hit with charges: 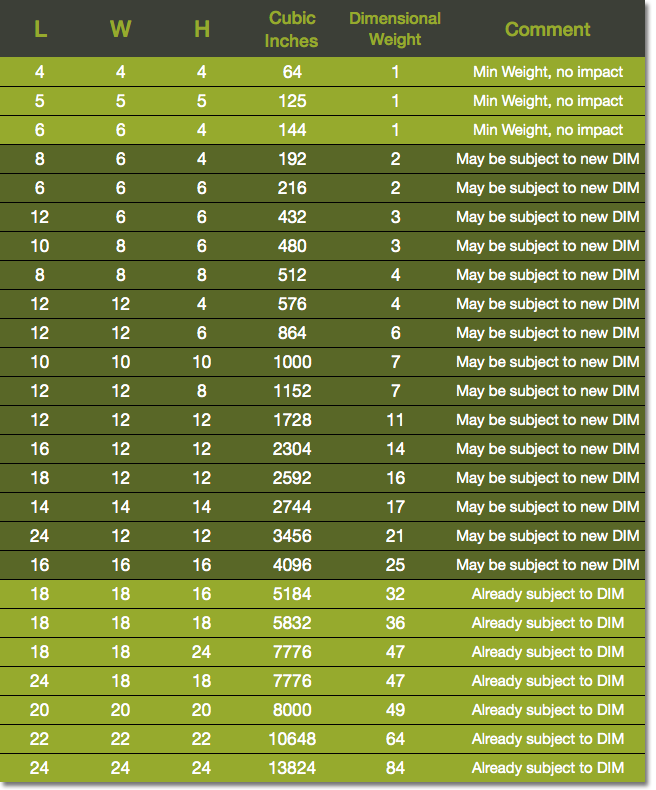 Charles W. Clowdis, Jr., the veteran trucking research analyst and Managing Director – Transportation Advisory & Consulting Services with IHS, said dimensional LTL pricing has been discussed by truckers for at least for the past 10 years, and maybe longer.

I recall nearly three decades buying tape measures and training a sales force in how to attempt a rudimentary estimation of cube and the impact on trailer space utilized,” Clowdis recalled. “Carriers attempted some pricing regs that raised the rates for any single shipment taking an entire trailer but the problem persisted.

The problem is carriers allowed the ubiquitous “FAK”––“Freight All Kinds”––rating concession surge rob them of one remedy—the true classification of Class 100+ freight. About a decade ago, Hank Mullen, principal at Dynarates and renowned trucking consultant, pushed the dim pricing idea but couldn’t move it forward. However, now that “laser-driven dimensioners” have been made affordable to LTL carriers, the dim pricing idea has gained traction anew.

“We need to simplify this process,” says FedEx Freight CEO Bill Logue. “It’s not going to happen overnight. Different customers will have different needs. It will be a long-term, dual type environment. It will take a long time.” Shippers, no doubt, will have a major say in this gravitation away from traditional class-rating system. Certainly the carriers will be better able to charge compensatory rates on lower classified, lightweight shipments. But the shipper will need to see value in this change, or else he or she will gravitate to one of the LTL carrier holdouts that can be counted on to buck the new system, experts said.

Already, UPS and FedEx are planning widespread use of dim pricing in their small package units, starting early next year. But whether that system can be expanded to the more staid LTL industry is an open question that even industry leaders have doubts. “The LTL industry is complicated because it’s tied to class pricing system,” Logue explained. “We use zone density based pricing that is very clear. A large portion of our business is small to medium customer that wears many different hats. Simplification is very important. They’re used to it on parcel side.”  “There is a large customer base that could move to simplified process as you build it,” Logue said. “Others could migrate to it. Whatever is right for that customer.”

Logue said FedEx Freight is already testing overhead dim machines in its regions to capture dimensions. In the short term, that information is being used to capture accurate dimensions of current shipments, and enables the carrier to making rate adjustments when it can. “But more important, it helps us build our costing models,” Logue explained. “We have real data on that customer. That is the long term value. It makes us better at costing.”

Logue said FedEx Freight would “expand that capture rate as we see the value. I don’t think we’re there yet. As long as we’re clear that dim machines work and are accurate, the data is what the data is. Overhead capture of dim is just another tool. It is not the end-all for dim pricing.”

A major advantage for the customer, Logue explained, is in automation. He said the new dim pricing model is “ideal” for small and medium-sized customers already using FedEx Ground and Express for parcel deliveries. With this model, “There is no need for another LTL carrier,” Logue said, explaining that FedEx Express, Ground and LTL services can be offered on one platform.

He said more than 90 percent of FedEx Freight customers already are using other services offered by FedEx. “Bundling is one of our key values and one of the great successes to our growth,” he said. “If you can make customer process ore time effective and easier, customers will migrate to it,” Logue predicted. “There are challenges. But if you can give an expedited solution that works, they’ll migrate to it. That small- and medium-sized customer is looking to reduce time and improve value. If you put it out there, it will be well received.”

Still, Logue conceded the LTL industry has “long way to go” in the dim pricing revolution, but added, “We’re working hard to put the pieces together.”