In these cases, all the profits from operations are transferred to a centralized location like corporate headquarters. Based on the centralized supply chain, these MNCs follow a business model for semiconductor industry based on Globalization as shown in figure 1. 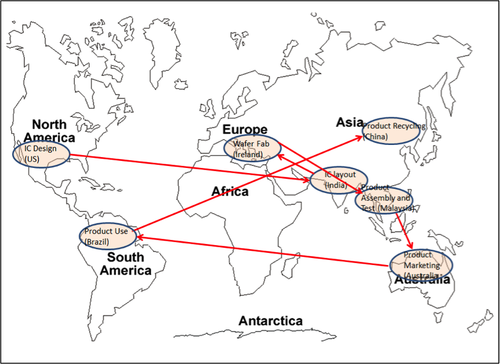 As shown in this figure, MNCs have spread semiconductor production operations across the globe when it comes to design engineering, test engineering, sales and marketing, packaging and assembly, etc.

In my article, Distorted Supply Chain Caused by MNCs Manufacturing Abroad and How to Restore Its Legitimacy, I argued that this business model of MNCs, which is based on globalization, has resulted in distorted manufacturing supply chain. This, in turn, has led to a variety of problems, including massive job losses in the home countries of MNCs, entry of counterfeit electronics into supply chain, and an unbalanced economy resulting from twin deficits (trade and budget).

Clearly, with these limitations, semiconductor manufactures needs to be reformed to address the pressures of globalization. The newly reformed business model needs to:

Taking into consideration the above specifications, I propose a three-tier business model for the global semiconductor industry based on Progressive Utilization Theory (PROUT), which was put forth in 1959 by its preceptor Prabhat Ranjan Sarkar. This model would make use of a decentralized supply chain in the middle industrial tier that would balance the supply and demand of goods into economy with a cooperative action of producers and consumers establishing a balanced economy.

A balanced economy is critical for semiconductor industry to reach next level of innovation and financial success. An economy is considered to be balanced when it does not have any trade and budget deficits. Such a balanced economy would increase domestic consumer purchasing power by letting the wages of workers to catch up with their productivity. To prevent foreign countries from taking control of the economy by accumulating huge foreign exchange (FOREX) reserves, macro-economic reforms are critical to move away from the temptation of Globalization and ensure sustainable local productivity and economy, which would eliminate trade deficits. 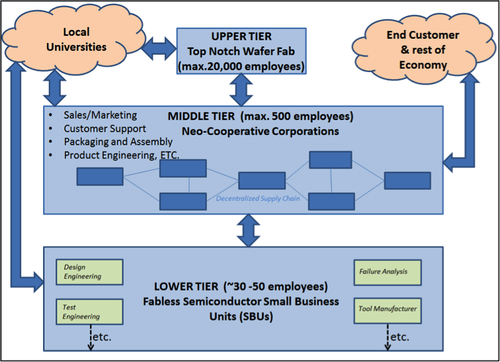 A three-tier business model for the semiconductor industry. As shown in model the upper Tier is a top notch wafer fab and fabless small businesses are a lower tier. The middle and most important tier have neo-cooperative corporations which have exchange relationships as decentralized supply chain. The middle industrial tier connects the other two industrial tiers with rest of the economy.

As shown in Figure 2, the upper tier is to be a top-notch wafer fab with sustainable and efficient capital investments through a symbiotic partnership between private investments and the local government. Such a partnership would ensure that the wafer fab has requisite capital investments, raw materials, tax holidays, good roads, and public transportation services, exemptions on sales taxes, accelerated depreciation of semiconductor processing tools, and expedited processing of projects.

To encourage entrepreneurship, fabless small businesses of 30 to 50 employees are at the lower tier of this business model with wholesome decentralization of engineering services like design engineering, tool manufacturing, test engineering, failure analysis, etc., so that each service provider acts as an independently managed small business. Anti-trust laws should be strictly enforced to prevent mergers and acquisitions that result in monopolies.

The middle industrial tier should be an employee-sponsored corporate sector with exchange relationships as a decentralized supply chain. This tier would interface directly with end customers and do business at extremely competitive price from lower and upper tiers. A decentralized supply chain increases cooperation between businesses, decreases wealth concentration, improves efficiency, and increases customer satisfaction. By interfacing with upper and lower tiers, the middle tier would manage supply and demand of electronics to maintain a balanced economy.

If neo-cooperative corporations in this sector notice that the customer demand is falling, then they would be able to accordingly communicate with the wafer fab at upper tier and the fabless business unit at a lower tier to avoid any overproduction of silicon.  Both the upper and lower tier could utilize economic downturns to either cut work hours of their employees, to train their employees or to concentrate on R&D activities.

In the present US economy, due to absence of a middle tier, whenever there has been stockpiling of inventories in a wafer fab; the fab has had to lay off its employees because of poor economic demand. Additionally, there is no way to have a balanced economic system because there is no premonition of changes occurring at macro-economic level to provide a feedback to the foundry or fabless companies to adjust its supply of goods with falling demand, which would avoid layoffs.