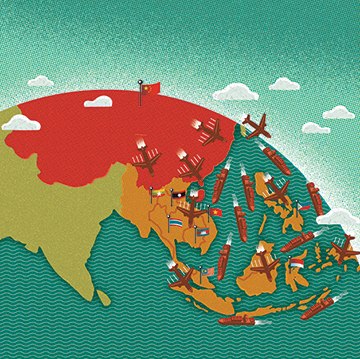 As treaties and trade agreements are implemented this year, more U.S. companies are looking at the Association of Southeast Asian Nations for fresh business opportunities. Fortunately, a whole host of logistics and transportation service providers are laying the groundwork to overcome inherent infrastructure challenges.

While China has been regarded as the “go-to” region for low-cost sourcing for most of this young century, the 10 member nations of the Association of Southeast Asian Nations (ASEAN) are becoming increasingly attractive for U.S. and multinational shippers.

In fact, Brunei, Cambodia, Indonesia, Laos, Malaysia, Myanmar, the Philippines, Singapore, Thailand, and Vietnam represent a collective GDP expansion exceeding 300 percent since 2001, and have outpaced the global growth average for the past 10 years.

“Today, ASEAN has a combined GDP of $2.4 trillion and a consumer base of 626 million,” says Alex Feldman, president and CEO of the U.S.-ASEAN Business Council. “It’s growing middle class, purchasing power, and trade ties all point to greater benefits for U.S. shippers over time.”

Feldman adds that the U.S. has invested more than $190 billion in the nations comprising ASEAN—more than U.S. companies have invested in Brazil, Russia, India and China combined. The ASEAN Economic Community (AEC), which is scheduled for implementation next December, aims to create one of the largest single market economies in the world, facilitating the free movement of goods, services, and professionals.

“Over the next decade, by virtue of its youthful populations, growing middle class, infrastructure development, and strategic position at the center of Pacific trade routes, ASEAN’s members will enjoy growth rates among the most robust in the world,” says Feldman. “The Council is convinced on strategic grounds that an effective alliance with ASEAN is central to the success of United States’ Asia-Pacific rebalancing strategy.”

This leaves U.S. shippers in an enviable position, add trade experts. They can exercise caution here as they seek ways to mitigate supply chain risk, but at the same time they can choose to make bold moves to explore long-term sourcing and supply options.

But while many logistics professionals agree that the region will play a central role in keeping U.S. economic growth roaring along, many acknowledge several remaining challenges.

With the vast Chinese market on its northern doorstep, ASEAN is poised to enjoy a ready market for surface transport delivery, but according to some trade analysts, policy guidelines and agreements have yet to be implemented to make this happen.

“With major disparities in development, principally between Thailand and the other lower ASEAN countries—and the Mekong river itself becoming contentious, with Vietnam criticizing Laos’ plans to dam the waterway—a Europe-style seamless cross-border experience is probably a decade away,” says Andrew Lim, a financial analyst with the Asian Development Bank financial analyst.

The projects cut across 10 sectors, including energy, agriculture, human resources, and trade, and most will be funded by governments, mainly of China and Thailand. The Asian Development Bank will also be financing some of the larger of projects.

Experts at the Malaysia Institute for Supply Chain Innovation recently noted that over the past decade, the number of vehicles has doubled in countries such as Indonesia, Vietnam, Cambodia, and Myanmar, but development of highways and related infrastructure has lagged.

Road quality and capacity varies greatly. Singapore boasts fully paved roads, while in Cambodia and Laos fewer than 10 percent of the highways are paved. About 98 percent of the 38,400-mile Trans-Asian Highway has been built, but critical links are still missing and the quality of some roads is questionable.

ASEAN nations still have both left- and right-hand-drive vehicles, with limited transfer stations at borders to allow for modular transfer of trucks and their loads between different road systems.

However, Ata adds, efficient cargo movement is overshadowed by “glamorous megaprojects” such as high-speed passenger trains, even though low-cost airlines today move people more cheaply without the infrastructure burden.

Maritime transport is also crucial, with 47 ports in nine countries forming the backbone of the ASEAN network. But aside from Singapore, Thailand, and Malaysia, the remaining gateway ports vary greatly in terms of cargo-handling capabilities. In Vietnam, for example, seaway transport is very cost-efficient—but all port and loading facilities are overly congested.

Many ASEAN countries have made improvements in areas such as air cargo for perishable exports, and facilities are generally adequate for current traffic levels in capital cities. However, general and perishable freight handling in some airports doesn’t meet the international standards. If improved, it could offer huge opportunities for exporters in regional locations.

The Malaysia Institute acknowledges that smart planning tools such as transportation management systems combined with global positioning tools can help to reduce freight transport operating costs. However, the high initial cost of training often deters smaller logistics services firms in the region from investing in these technologies.

“Disparities between transport networks are also a drawback,” says Ata. “In some countries, such as Indonesia and Vietnam, telecoms infrastructure in rural areas is weak, making cargo tracking difficult.”

Another fragile link in regional supply chain operations is a lack of trained and capable human capital. This problem is not unique to the region, but Southeast Asia is starting from a lower base in that it lacks the education and research centers seen in developed economies.

“Enterprises that are unable to design, build, and manage world-class supply chains are at a serious competitive disadvantage,” says Dr. Albert Tan, associate professor and director of education at CEL Consulting, an economic research firm based in Singapore. “Southeast Asian companies must develop supply chain solutions geared to the region’s special demands to compete effectively, and copying Western best practices is not a viable option.”

Southeast Asia is uniquely positioned to benefit from the global shift in economic power from West to East, he adds. “But if the region is to realize its full potential, developing world-class supply chain facilities and expertise must be a top priority,” says Tan.

3PLs to the rescue

One of the most challenging hurdles throughout the ASEAN region is poor supply chain infrastructure—which if not addressed, will continue to impede future growth. Richard Armstrong, chairman of the third-party logistics provider (3PL) research and consulting firm Armstrong and Associates, maintains that a handful of prominent lead logistics providers can help U.S. shippers to do business in ASEAN while regional governments attempt to build more transport networks.

“We suggest that U.S. shippers seeking a foothold in ASEAN become acquainted with a variety of leading 3PLs in the region,” says Armstrong. “Shippers should examine which companies are expanding their LCL networks and services this year.”

Panalpina, Toll, and Sinotrans are among the more promising players in this marketplace, notes Transport Intelligence (Ti), a London-based think tank. And then there’s the giant provider of global supply chain services, UPS, which has intensified its efforts to help small and medium-sized enterprises find opportunities in ASEAN.

According to Jim Barber, president of UPS International, the company is working with local governments to establish entry-clearance programs for lower-value and lower-risk shipments, such as those purchased online for personal use. “The Organization for Economic Cooperation and Development [OECD] has estimated that customs barriers add a 10 percent to 15 percent premium onto the price of goods sold,” he says. “Eliminating those costs through customs modernization could be a tremendous boon to ASEAN economies.”

And while these global providers are making strides to build their services in the region, there’s still more room remaining for shippers and 3PLs in this vibrant marketplace, says Mads Lauritzen, an analyst with The McKinsey Global Institute in Bangkok.

“Increased consumption in the bigger cities in the region will finally create the scale for 3PLs that specialize in last-mile logistics,” says Lauritzen. “These companies will start with a few key accounts, but will soon become aggregators serving multiple manufacturers and retailers in a locality.”

According to Luritzen, multiple routes to market within the same cities will promote different last-mile logistics models. “The modern, multi-brand retailers and the larger, single-brand retailers that promise consumers better service will prefer to work with the more professional logistics service providers,” he says. “At the same time, smaller, distributed retailers with an emphasis on low prices for customers will remain cost-focused and will seek low-cost, entrepreneurial delivery models.”

But time is of the essences, McKinsey analysts add, noting that Asia and ASEAN will surpass North America in 2015 as the biggest e-commerce market in the world.

“And there are no signs of that changing,” Luritzen adds. “By 2017, it is expected that e-commerce sales in the region will top $1 trillion or 20 percent more than North America.”