Leading companies like General Mills, Walmart, Pepsico, FedEx and Anheuser-Busch have made reducing fuel use and emissions from freight a priority in setting their internal supply chain performance goals. By Tom Murray | Supplychain247

Freight transportation is the work horse of the global economy, ensuring that the products consumers want get on the shelves where and when they want them.

With 70 percent of U.S. goods being moved by truck, freight is a key source of U.S. fuel consumption and corporate greenhouse gas (GHG) emissions.

Today, freight also offers companies a key opportunity to drive us toward a lower carbon future.

Over the life of the program, these robust standards will cut fuel consumption in new trucks by 1.8 billion barrels of oil and reduce carbon emissions by one billion metric tons.

Leading companies like General Mills, Walmart and Anheuser-Busch have made reducing fuel use and emissions from freight a priority in setting their internal supply chain performance goals.

But Pepsico’s willingness to step forward with this op-ed is a prime example of how companies can extend their leadership by aligning their public policy stances on with their sustainability goals – what EDF has been referring to as the business-policy nexus. 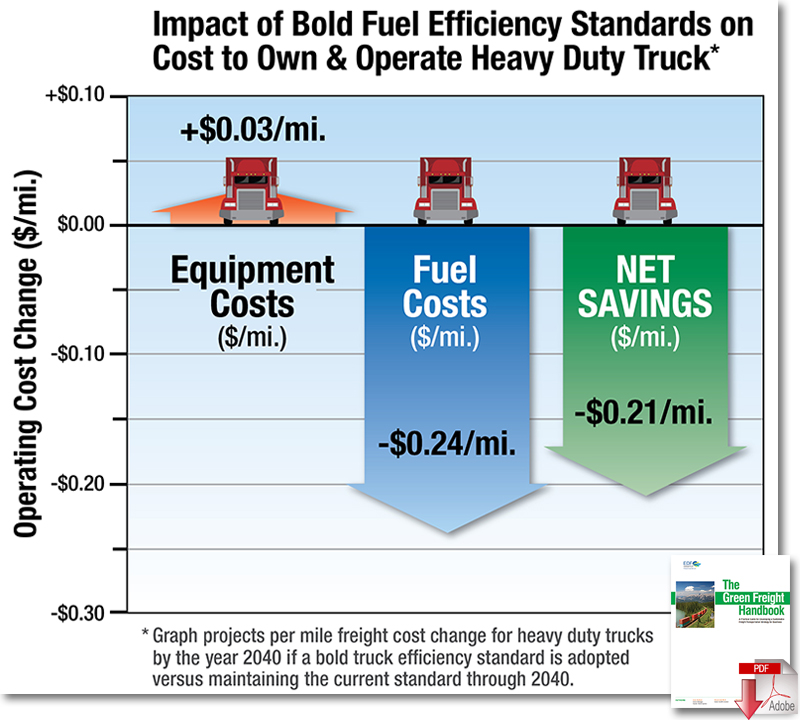 Freight affects all of us, but business is in the driver’s seat

Freight transportation exists to serve companies that make or sell physical goods, from brands and manufacturers using trucks to bring in supplies and ship out final products, to technology companies needing trucks to deliver the hardware that powers their online services.

While medium- and heavy-duty trucks only make up 7 percent of all vehicles on the road, they consume 25 percent of the fuel used by all U.S. vehicles.

For firms like Pepsico, who maintain their own fleets, as well as those that contract out for freight moves, fuel is the single largest cost of owning and operating medium- and heavy-duty trucks.

Truck fuel prices have increased 58 percent since 2009, a strong incentive for increasing the efficiency of trucks that move freight. Consumers are counting on businesses to solve this problem, as those costs are passed on to consumers. Through everyday purchases, the average U.S. household spends $1,100 a year to fuel big trucks. Strong standards can cut this expense by $150 on average a year by 2030.

A big consumer goods company, for example, could save annually as much as 3 billion gallons of fuel and $11.5 million in freight costs per year in 2030 by using newer trucks produced under strong truck standards.

Supporting strong truck efficiency standards is also an important way for companies to proactively mitigate risk. In a world with higher oil prices, we could see freight costs double; however, even in a scenario where oil prices remain low, savings would still be significant.

Standing against or keeping quiet about the proposed rule is essentially committing to higher long-term costs, more greenhouse gas emissions and greater fuel use than would be the case under stronger efficiency standards.

Who will speak up next?

In addition to speaking out in the Wall Street Journal, in a press release issued on June 19th, Pepsico joined companies like Cummins Inc., Eaton Corporation, FedEx, Waste Management and IKEA in voicing their support for the standards to both the White House and the EPA.

Because freight touches many points along the corporate supply chain, companies have a responsibility to push for strong standards that minimize the environmental impacts of moving goods in the U.S.

This is smart business, and it’s another piece of the climate puzzle we’re racing to solve. Every company voicing support will help us all move down the road towards a cleaner future.