Whether they are opening new DCs, improving inventory control, or turning to 3PLs to improve processes, survey respondents tell that there’s no one prominent way to keep costs in check while simultaneously improving service levels. By Maida Napolitano  November 26, 2013 Supplychain247.com

According to the findings of our Warehouse and Distribution Center (DC) Operations Survey over the last four years, it’s been tough going for logistics professionals looking to expand on their capabilities inside the four walls.

In an economy that’s been slow to recover, reducing operating and transportation costs has continued to be the top priority—with little or no capital to spend.

This year’s survey results are only slightly more encouraging. Fifty-two percent of responding companies are planning to spend $250,000 or more for equipment and technology to improve their warehouse and DC operations—just a few points over last year’s 48 percent.

Designed to gauge activities and trends in warehouse and DC management, our annual survey offers a first-hand look into how U.S. operations are currently being run. In September, a survey questionnaire was sent via email invitation to Supply Chain Management Review (SCMR) subscribers.

The survey gleaned 530 qualified responses, from upper-level managers all the way to CEOs—all personally involved in decisions regarding their company’s warehouse and DC operations.

Most participating companies came from manufacturing (38 percent), followed by distributors (31 percent), third-party logistics providers (9 percent), and retailers (8 percent). A broad assortment of products handled in the DC was once again well-represented, with food and grocery leading the pack at 14 percent, followed by paper, packing, and office supplies at 7 percent, and electronics and automotives/aerospace tied for third at 6 percent each. 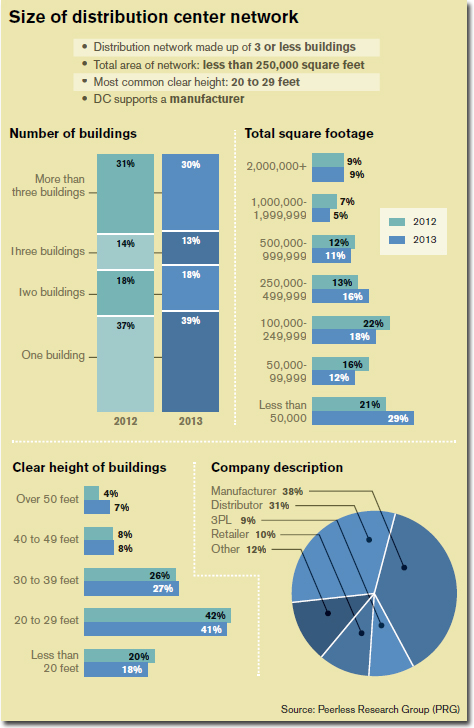 In this new normal of barely budging budgets, how exactly are today’s logistics professionals planning to keep costs in check while simultaneously improving service levels?

“According to the findings, everyone’s doing multiple things. Whether opening new DCs, turning to a third party logistics provider, or renegotiating with freight carriers, results show that there’s no one prominent answer among this year’s respondents.”

Most are carrying out initiatives that don’t involve major system changes and require hardly any capital investments, such as improving warehouse processes and improving inventory control.”

Over the next few pages, we’ll present how the warehousing and distribution landscape has changed over the past year, track critical measures of warehousing activities, and interpret results against a backdrop of current industry practice. We’ll also highlight emerging trends in warehousing and supply chain management as we tack on another year’s worth of results. Now, let’s see how your operations measure up.

What’s trending?
While the top priority remains reducing operating costs, it’s encouraging to note that 94 percent of respondents tell us that they are doing something to achieve this goal. In fact, companies are favoring not just one, but two top initiatives: improving warehouse processes (67 percent) and improving inventory control (61 percent).

Derewecki questions if this latter push to control inventory is really working. “There’s an emphasis on controlling inventory, but it doesn’t seem to be translating into improved turns.” In fact, results show that average inventory turns are holding steady at about seven turns per year over the past two years. 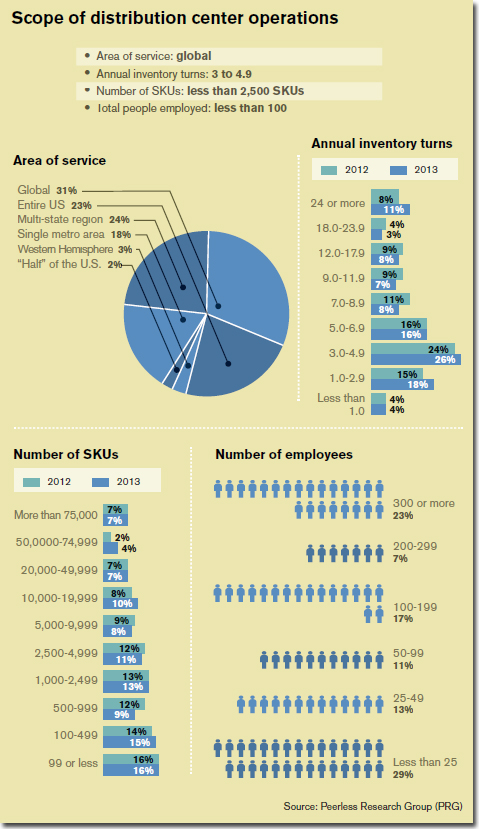 Derewecki speculates that this may stem from the continued “silo” mentality between buyers and warehouse managers. “The buyer gets a huge discount off a case of product, so he buys an entire rail carload without considering the negative impact it has on the warehouse manager who is incented to reduce costs. The warehouse now has to deal with the increased costs of this overstocked inventory.”

To reduce transportation costs, the majority (60 percent) of companies are “renegotiating freight rates,” followed by “shifting the mix of common or contract carriers” at a distant second (26 percent). Saenz points out that renegotiating rates is relatively easy to do. “It doesn’t require any systems or any capital investments,” he adds.

But more importantly, Derewecki notes how respondents are also “asking customers to order less frequently but in larger quantities” and “using 3PL warehouses to get closer to customers.”

“Again, there is no one single right thing you have to do,” says Derewecki. “Companies are trying out multiple initiatives to achieve the ultimate goal.”

Saenz and Derewecki believe that there’s even more evidence of optimism to found in this years data, with 72 percent of respondents reporting that they plan on expanding their distribution operations in some way in the next 12 months—versus only 60 percent last year.

While most are planning to “increase their SKUs” (30 percent), some respondents (14 percent) are opting to “increase the number of buildings” in their network. Saenz believes that these firms are trying to reduce outbound transportation costs as a result of high fuel prices.

“Strategy projects that we’re currently working on involve businesses that have an East Coast presence with a growing number of West Coast customers,” says Saenz. 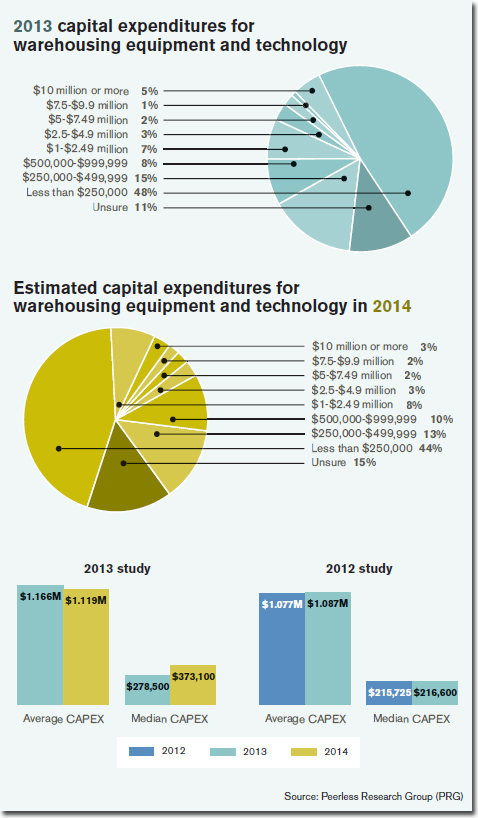 “These companies are contemplating opening a West Coast facility not only to control shipping costs, but also to improve service by getting closer to their customers.”

Our findings also show that warehouse software solutions continue to radically change how we do business in the DC.

Results reveal a slightly upward trend in respondents using cloud-based technology—1 percent in 2011 to 5 percent in 2013. Derewecki expects the use of cloud-based solutions to increase particularly among smaller and midsized companies.

“They will be able to afford these software solutions without the need for a considerable up-front investment in hardware and software,” he adds.

This year, a slightly higher percentage of respondents (17 percent versus 15 percent) experienced catastrophic events compared to last year. Open-ended responses show Super Storm Sandy as one of the main culprits, shutting down power and flooding warehouses in the Northeast.

Blurred lines for e-commerce
The growth of omni-channel marketing finds us keeping a close watch on the different channels respondents are servicing. Derewecki says he’s surprised by the very slight uptick in e-commerce over the past year—from 29 to 30 percent. “This is a growth area among our clients in all areas,” he says. “And as time goes on, that 30 percent will likely increase considerably. If you’re not servicing e-commerce now, you’re going to be.”

Saenz points out that even more manufacturers are offering their products online. “The line has blurred between retailers, manufacturers, and e-commerce,” he says. There is also a decrease—from 40 percent to 35 percent—in companies carrying out e-commerce fulfillment on their own from within their existing DC. “When e-commerce starts out, it is all in-house, squeezed into a corner somewhere,” Saenz adds. 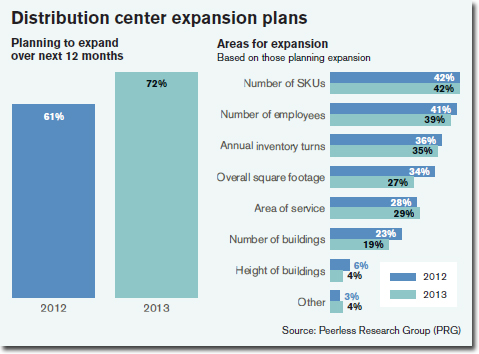 “As it grows, then it becomes an entity unto itself,” say Derewecki. “The e-commerce business becomes very protective, not wanting the retail business to ‘steal’ e-commerce inventory.

Thus the e-commerce business wants to be in a total separate facility—perhaps run by a 3PL.”

Saenz says that he anticipates that the biggest future trend will be retailers trying to service e-commerce from their stores.

“It’s happening now, where they’re taking inventory out of the DC and processing those orders from their own storefronts—which makes sense from a geographic perspective in many cases as well,” he adds.

While most DCs still have clear heights of 20 feet to 29 feet, Derewecki points out how there is a slight increase in buildings over 50 feet. “As time goes on, new, taller buildings are being added to the stock,” he says.

More respondents are planning periodic distribution network optimization and location studies—in exchange of the “as-needed,” reactionary study. Saenz says he’s seeing this firsthand. “These studies have become a regular activity for firms looking to stay competitive and make a profit.” 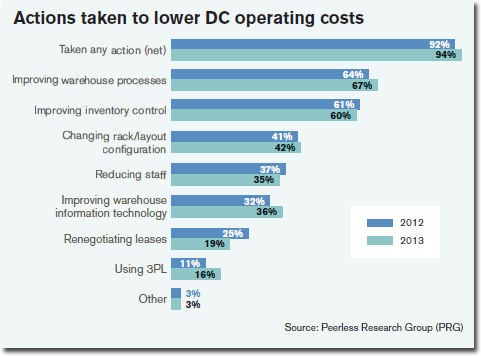 Derewecki concurs, but notes that companies may sometimes require a mid-term update.  “As companies make acquisitions, as they tack on new product lines, their needs change,” he says. “We’ve been called back within relatively short periods of time just because they want to validate a study they completed recently.”

And while recycling continues to dominate sustainability efforts at 71 percent, our experts also noticed a growing trend in “solar panels” and “LEED certification” coming out of this year’s data. LEED (Leadership in Energy and Environmental Design) certification is a rating systems developed by the U.S. Green Building Council (USGBC) to rate a facility’s environmental friendliness.

According to the USGBC, LEED-certified DCs continue to command higher rents because of its energy-saving features. And in good news for those facility operators, the push to go green remains a hot topic, with only 7 percent of companies “not at all likely” to evaluate green or environmental issues.

The last word on full pallets
The days of forcing customers to receive full pallet quantities of a SKU are few and far between.

According to this year’s data, most are receiving and shipping product in a mix of full pallet, case, and split case quantities. Saenz points out that regardless of the inbound unit of measure, the outbound trend will be in smaller quantities, such as split and full case.

Derewecki agrees, recalling a project he completed for a New York-area hospital where storage space was at a premium: “If patients needed something tomorrow, the hospital would order it today and they expected their suppliers to deliver it to them the next morning. They depended on their suppliers’ supply chain to deliver. Now, as a manager of your own logistics and operations, do you think your customers could depend on you?”