Home Procurement & Sourcing Articles 10 things you need to know that will make or break your...
Facebook
Twitter
Linkedin
Email
Print 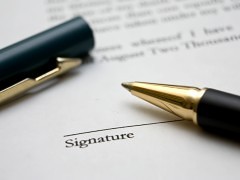 Contracts are an inevitable part of business life, but whether you have a bevy of City lawyers at your disposal, or are crossing your fingers and hoping for the best as you sign on the dotted line, the secrets to successful deal-making are here.

1. Contracts can be made by accident

When you prepare a proposal for a would-be client, it probably states that it is subject to your terms and conditions. If they like the proposal and a purchase order arrives in your inbox, do you instruct the team to ship the order?

The title at the top of your contract is not definitive when it comes to working out what kind of contract it is. If it’s called a Reseller Agreement, but actually describes a sales agency relationship, your “reseller” will be entitled to all the rights and benefits of the Commercial Agents Regulations 1993. Similarly, naming a document ‘Heads of Terms’ doesn’t stop if from creating a legally binding contract if its contents fit the contractual bill.

Just because a client has a household name, it’s not necessarily a good credit risk. Many PLCs have subsidiaries that share the group company name, each performing different roles within the group. They may put risky deals through a subsidiary with little or nothing in the way of assets. If things go wrong, the PLC can wind it up and walk away.

4. Focus on the nuts and bolts

Most deals go wrong because one party hasn’t done what the other thought it should. Often this is down to mismatched expectations, inadequate specifications and failure to be clear about what each party wanted from the deal.

5. It takes two to tango

It’s rare that anything other than the simplest deal can be delivered by the supplier working in isolation. Agree in the contract exactly what the client must do to make it a success.

Nobody wants to pay for something they don’t think they’ve received. Invoicing based on achievement of key milestones requires clearly and unambiguously measurable milestone criteria.

You might fail to meet deadlines or pass acceptance tests because of delays, or quality problems from other suppliers, or the client themselves. If your performance depends on input or pre-work from others (see point five), make it clear that you’re not responsible for problems of their making.

Create an easy-to-follow process for managing change in your contract. Many disputes begin as poorly managed scope-creep. Overly complicated change control process are just ignored or circumvented, so keep it simple.

9. Enforce your right to prompt payment

Customers who don’t pay on time are not good customers. You are entitled to charge interest and costs for late payment under the Late Payment of Commercial Debts (Interest) Act 1998. The threat of an invoice for interest is often enough to prompt payment.

Your contract should reflect reality if it’s to be useful. It’s better to have a simply worded contract that clearly says what each party will do, when payment will occur, and how you’ll deal with problems, than a 50-page mass of “off the shelf” legalese that bears no resemblance to the deal concerned. By keeping it real, you can make your contract contribute to a great deal outcome.